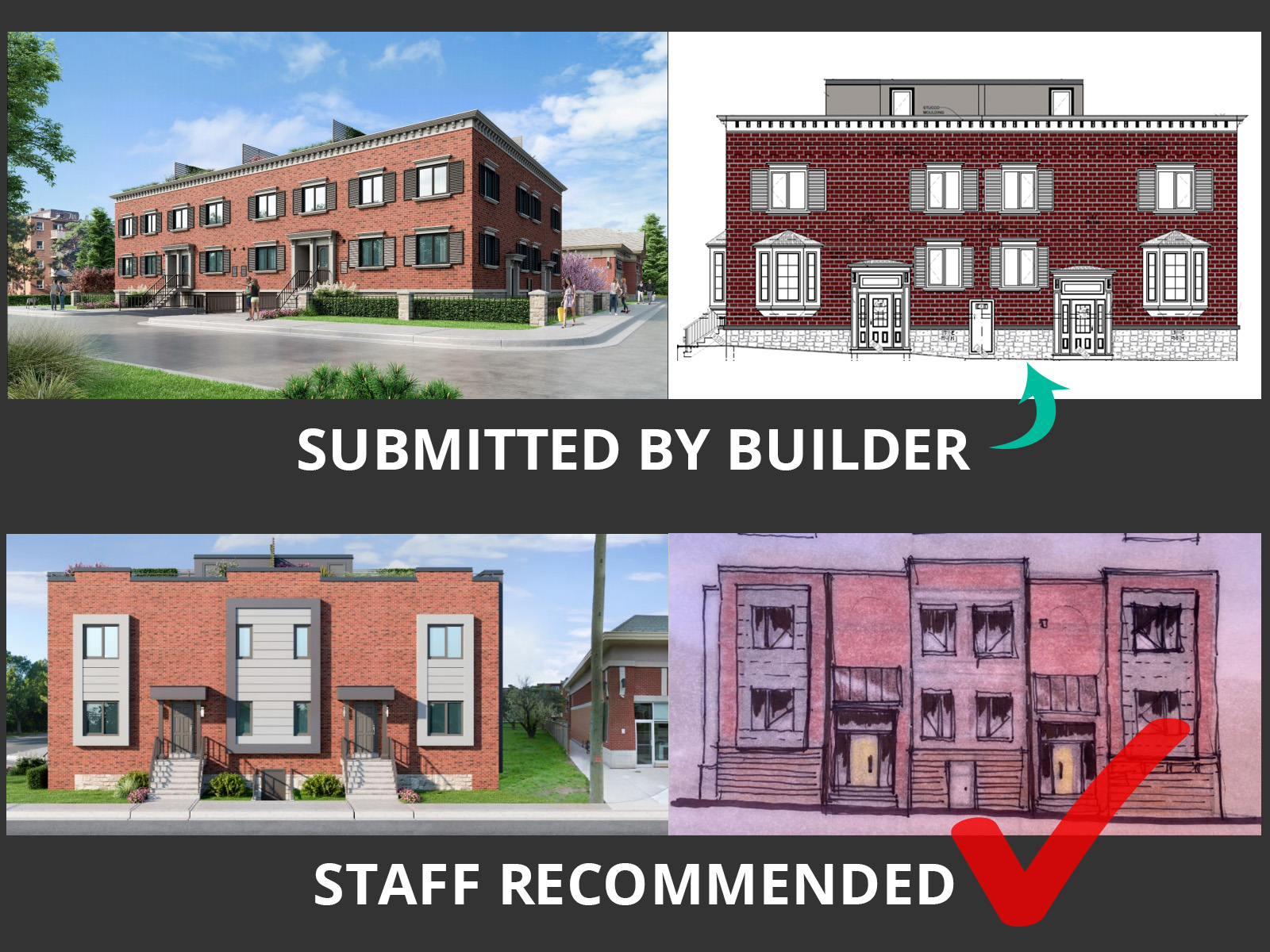 In the series of “confusion created by Planning Staff”, here is another head scratcher that we discovered digging deeper into a Planning recommendation report from the marathon COTW agenda Monday night. This report was to recommend the site plan application at 3 Slessor Blvd.

In 2018, a zoning By-law Amendment application was submitted for the development of a townhome complex at the corner of Slessor Blvd. and Livingston Avenue. After a public meeting was held in 2019, the amendment was approved by Council in 2020.

A new site plan was resubmitted by the applicant in March this year. This was presented by staff at the HGAC meeting in June, where it received positive comments from the committee members. The new design featured a brick building with traditional elements, an improvement from the old proposal of 2018 that was criticised by HGAC members and residents.

Since heritage preservation and encouraging sympathetic development is a hot topic for Grimsby, one would think that this improvement would be greatly appreciated by staff, and the plan would go through without a hitch.

But again, we’re talking about Grimsby’s Planing Department, which today seems in more disarray than ever. Therefore, in a surprising turn, staff made a new recommendation that the design be practically reversed to the one from 2018.

The reactions from Council members were quick and not flattering. The situation spurred a discussion about brick and stucco, heritage look and Regional staff involvement, with Councillor Sharpe taking the lead and supporting the better design. We encourage you to listen to the arguments brought by Councillors Sharpe and Bothwell, and the responses from staff about “compatibility”, “heritage”, and what was recommended by HGAC on June 8th.

The resolution written by staff at the HGAC meeting recommended that the proponent include both Town’s and Regional staff to “finalize a compatible design for the application”. It was never made clear or mentioned that this would be the extent they would consider. Not a single note from staff, even after the positive comments over the new design from the committee members.

Trying to make sense of the reasoning behind all this, we went back to the resolution approved at the HGAC. But instead of answers, we got more questions.

Can you spot the differences between the actual resolution approved and what was registered in the minutes? Compare them side by side:

Watch this footage from the meeting to see if you found all the wording added or removed by staff from the resolution approved by the committee:

This is not merely some typographical error, it is clearly an attempt to misrepresent the approved resolution of HGAC. Isn’t it ironic that the motion raises misplaced concerns about “falsification of heritage”, while what we have is falsification of Heritage minutes.

When we checked the records in the Town’s Document Centre yesterday, these minutes were modified on June 21st and added at the last moment to the COTW agenda for the same day.

What else has been changed and pushed through, taking advantage of the insane agendas of the COTW? How can Council trust “our planning experts” with honest recommendations for legally-binding decisions? Or crucial planning policies like the ones for the Main Street East HCD or the upcoming Official Plan?

Residents and Council are always given “a good explanation” for the staff’s questionable actions. As long as the current CAO and his team are protected by their “G5” shield, there will be no accountability for them. That can only be fixed at the ballot box. Until then, we’ll have to keep on spotting the differences.