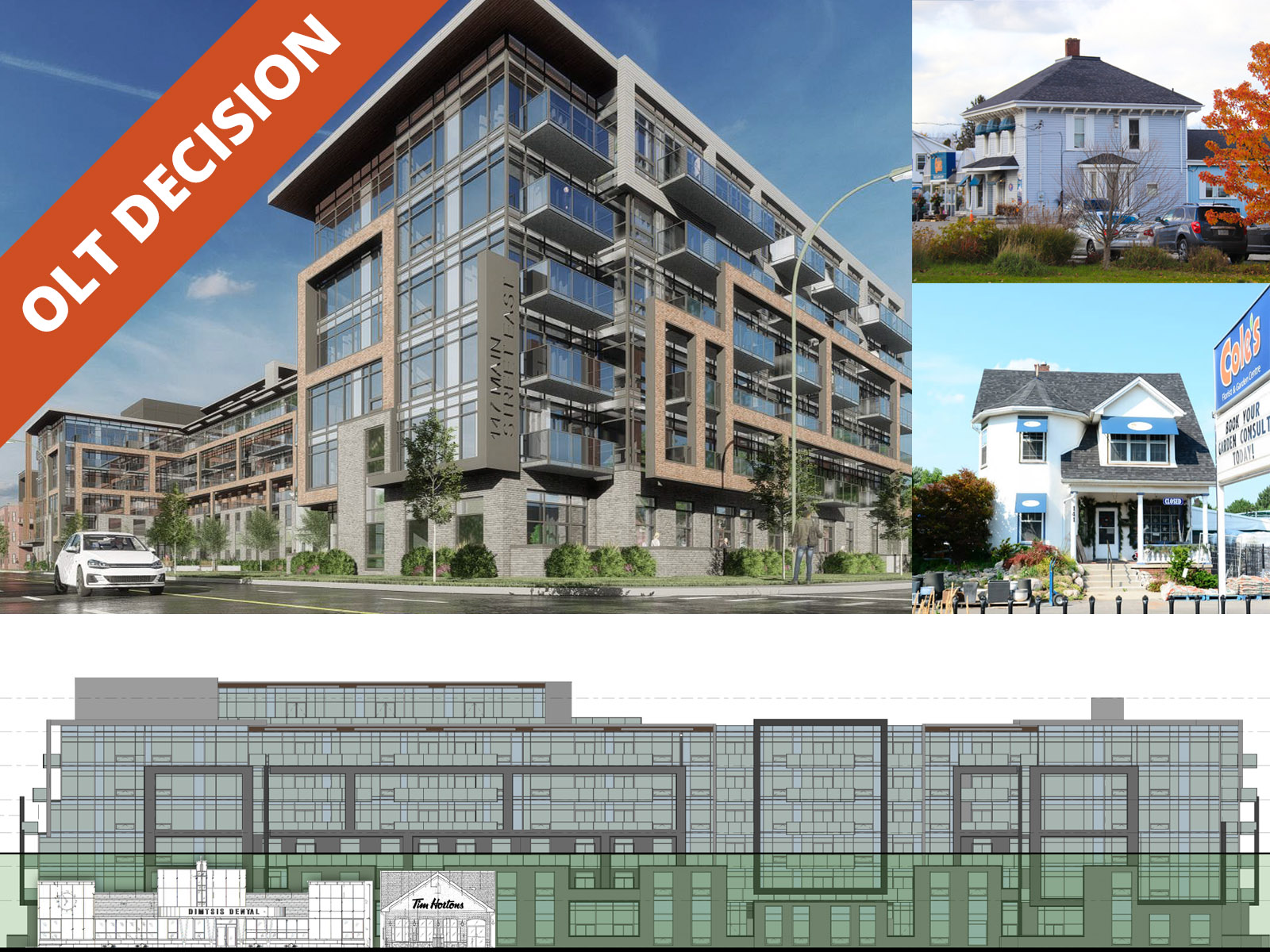 After a two week hearing this past July, yesterday the Ontario Land Tribunal (OLT) issued the much awaited decision on the proposed development at 141 - 149 Main Street East (Cole’s Florist).

You can also view the document here

There were two major aspects debated in this appeal: heritage conservation and the appropriateness of intensification at this location of Main Street East. With this decision, the Tribunal addressed both: ordering the retention of two heritage houses, while unfortunately, now setting the precedent for this area by enabling a six storey mixed-use development on the site.

As participant in this appeal, SaveMainStreet provided the Tribunal and the Parties submissions with arguments and visual evidence supporting our community’s opposition regarding this proposal. Many of our points were echoed by Town’s witness experts.

You can also view our submission here

This OLT decision is a mixed bag: a win for heritage preservation on the site, but completely missing the point of the inappropriateness of this proposal’s excessive height and density. This will ultimately result in the loss of the small-town character in this area of Grimsby, and compromise the Scenic Highway Heritage Route of which Main Street East is part of.

On the positive side, we are pleased to see that the Tribunal denied applicant’s request for demolition of the two historic buildings. The Tribunal sees the retention of 141 and 147 in substantial form preferable to their near removal and replacement with commemorative features and plaques. This finding took in consideration the 39 Cultural Heritage Landscapes outlined in [link] the Town’s document “Grimsby’s Special Places”, the physical characteristics of the two buildings, their contextual heritage value, as well as the intention of the community to recognize and protect Main Street East as a Heritage Conservation District.

In addition to ordering the retention of the heritage buildings, the Tribunal recommends their designation under OHA (Ontario Heritage Act). The intent to designate was approved by Council before the applicant’s appeal at the OLT. However, because the applicant’s appeal occurred before the new OHA came into effect, the Tribunal can not issue a decision to designate, leaving the approval of the designation by-law to the (likely new) Town’s Council.

We find that the Tribunal decision may have implications at a larger scale. It clearly and loudly recognizes the historic importance of Main Street, encouraging conservation of its heritage buildings. This is outlined several times throughout the document (emphasis are ours):

..."the retention and preservation of heritage structures ensures their visibility to tell a story much more effectively than attempting commemoration through such measures as documentation or signage, following their demolition".

"...the stories of tender fruit farming and of Main Street are better conserved and told by the sequence and repetition of early farm houses telling their story by their physical presence and any associated commemoration. Less history and learning are conveyed with fewer remnants of early days of settlement. The retention of such houses along Main not only conserves heritage but also helps retain the small town character of Grimsby while necessary and compatible intensification occurs in an appropriate location amidst them."

"[64] Akin to the cliché of 'a picture is worth a thousand words,' the very presence and frequency of these heritage dwellings display the story of early settlement and tender fruit farming along Main. While additional commemoration will provide a deeper understanding, the history displayed so effectively through attribute preservation is the reason this option is preferred and why demolition remains the rare exception. Contrary to the Applicant's suggestion that several other listed or designated properties along Main reduces the heritage loss of removing 141, the Tribunal finds that the number, rhythm and repetition of these dwellings carry strong potential as a collective heritage attribute, as is now being considered in the Town's Main Street East HCD Study. Whether or not such HCD proceeds, the positioning of 141 and 147, in step with 133, effectively reflect this area's history worthy of protection."

Also, Main Street is recognized by the Tribunal as “a Scenic Highway Heritage Route used by indigenous people and early settlers, including through the War of 1812, and later as the route of the Hamilton-Grimsby-Beamsville Electric Railway”. The important heritage attributes and features of Main Street, which were ignored or minimized by both applicants at 133 and 141-149 Main Street East, must not be overlooked by the new Council while considering the upcoming comprehensive planning decisions for the area.

To reflect its heritage findings, the Tribunal ordered Mr. Losani to redesign his proposal. The new structure will stand at 6 storeys and should be placed mainly behind the two heritage buildings, while maintaining the proposed wing on the east side at the intersection with Wentworth.

The Tribunal paves the way for the abandonment of the necessity for other than designated Heritage properties to maintain the historic roadway setbacks. The Tribunal found “that portions of the building, in final design, can bring commercial uses close to the street, potentially in the form of the current concept plan adjacent to the Main-Wentworth intersection.” Further the Tribunal agreed with the applicant’s concept “that it is not unusual for oblique views along a street to be concealed temporarily by buildings or parts thereof as one moves along the street. This finding supports the design component of the east end of the building at a minimum setback from Main and Wentworth.”

We note that such a minimum setback exists no where in Grimsby east of Robinson Street. In our view, allowing minimal setbacks on portions of new developments is detrimental to preservation of an important heritage attribute of Grimsby’s Main Street and ignores the specific setback requirement in our Official Plan.

One area of agreement among all parties was the suitability of the site for some level of mixed use intensification with the Tribunal finding that the intensification at the scale proposed is warranted. Their reasoning is based on this proposal adding substantial commercial/office space, diversifying the housing supply with apartment units while providing live-work opportunities with the nearby hospital and other employers.

We note that we are in agreement in principle with these motives but not with the scale. All these positives could be obtained without the substantial difference from neighbouring building heights that six storeys exhibits. The Tribunal further quotes from the Town’s Official Plan (TOP) that directs that scale respect “small town character”. While the TOP unfortunately does not provide a clear definition of what that means, one could simply look at the current town’s setting and wonder by what stretch of imagination six storey buildings would be “in character”. 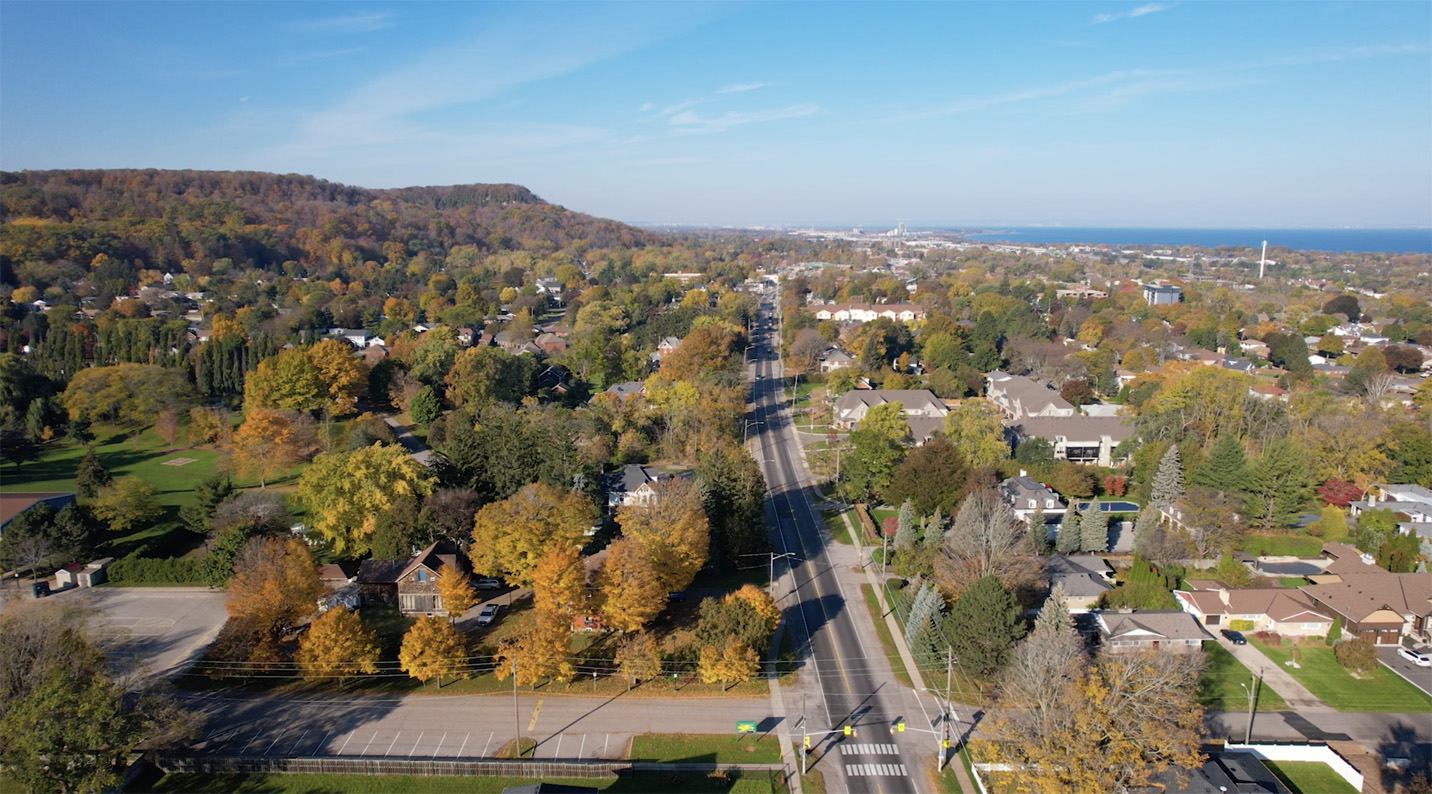 “The Tribunal finds the general scale and massing of the building to constitute compatible development … Similar adjacency between residential and commercial uses exists with the plaza immediately east of the site, where its rear wall and service lane are close to the lot lines of neighbouring dwellings.”

We note that the east side of Wentworth as described has the current zoning’s maximum height of 2.5 storeys. Comparison between this site and the proposal’s height as being equivalent as to its influence on properties directly north of each is in our opinion ludicrous.

“The Tribunal makes two observations in support of its finding that intensification at the general scale proposed here by the Applicant is acceptable. First, it is clear that the Town, through the TOP, considers the scale of development permitted in the MIA in the vicinity of the GO Station as not detracting from Grimsby’s small town character. Existing and permitted development there includes numerous tall buildings containing high residential densities. This site’s development is much smaller and is considered medium scale by the witnesses. Second, small-scale infill is permitted in other parts of the Town provided it is sensitive to the surrounding housing character. While a medium scale here, the Tribunal finds compatibility with adjacent residential areas.”

We note that densities surrounding GO Stations are Provincially mandated. The area around the proposed GO station was outside the Town of Grimsby until at least 1970 when the reconstruction of the QEW began. It in no way could ever have been considered part of “small town” Grimsby. In fact, the whole development of the Casablanca interchange area was expressly designated and zoned for the Provincially mandated density intensification in order to allow the “small town character” of then distant Town of Grimsby a chance to survive.

This decision is certainly not what the citizens of Grimsby were hoping for although not a complete failure. On the plus side, heritage properties along Main Street now have a precedent for their protection from unwarranted demolition and their maintenance of their roadway setbacks.

On the negative side, precedent is now furthered in favour of unwarranted over intensification. As long as we have Provincially mandated and adjudicated application (OLT) of such over development designed to suit metropolitan Toronto’s needs, all small communities such as ours are at the mercy of the development industry.

It is unfortunate that this situation will not change until we, the voters of Ontario, change it with our ballots. We can begin by electing a Council on October 24th that is willing and able to direct our Planning Department and Administrative staff to put the brakes on such over development that’s starting to spread throughout our town. As this Council will be responsible for our new Official Plan, Grimsby needs to keep its identity and be known as a place where the small-town feel and its rich history thrive.