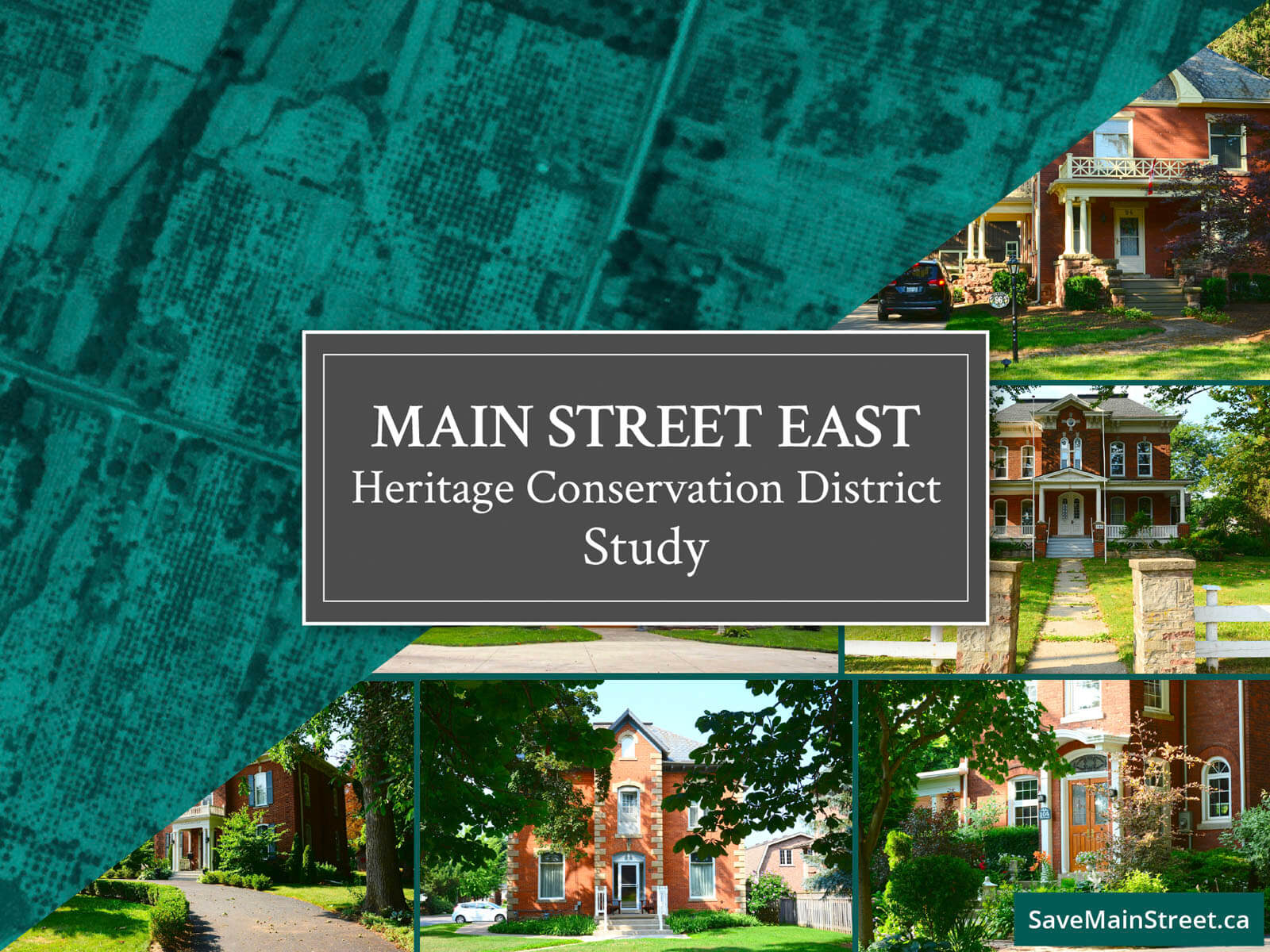 Finally, some good news! Monday night, the motion to start the Main Street East Heritage District Study has been approved by the Committee of the Whole. In order to take effect, the by-law will receive a final vote at the November 2nd Council meeting under approval of the minutes, along with other recommendations from Monday’s COTW meeting. While this decision needs one more voting, we are very pleased to see that our collective voices have been heard.

We are grateful for those Councillors who supported this study and we’re hopeful that they remain faithful to the community and their promise to protect its values. We encourage you to send them a thank you letter and ask for their continued support:

A note that Councillor Sharpe declared a Conflict of Interest and he did not participate in the discussion or voting of the motion.

Like every discussion that touches the protection of Main Street East historic character, this one too was rather difficult to watch. The “issues” brought forward wouldn’t be any issue if staff were supportive of heritage protection in town. As Councillor Vardy pointed out, Council was looking for comments on how to move this study forward and not for arguments not to do it.

Despite all this, the positive result from this meeting is an encouragement that Grimsby may finally be joining the other heritage-minded communities of Ontario, and Main Street East could soon be on the list of the 147 heritage conservation districts in the Province.

Our group had a delegation in support of this study presented by Ron Schroder. A thank you to Town’s staff for their helpful approach and making this an easy process. You can watch the meeting at the GCFRG Facebook archive or at the Town’s Vimeo archive.

Below is a text version of our presentation: 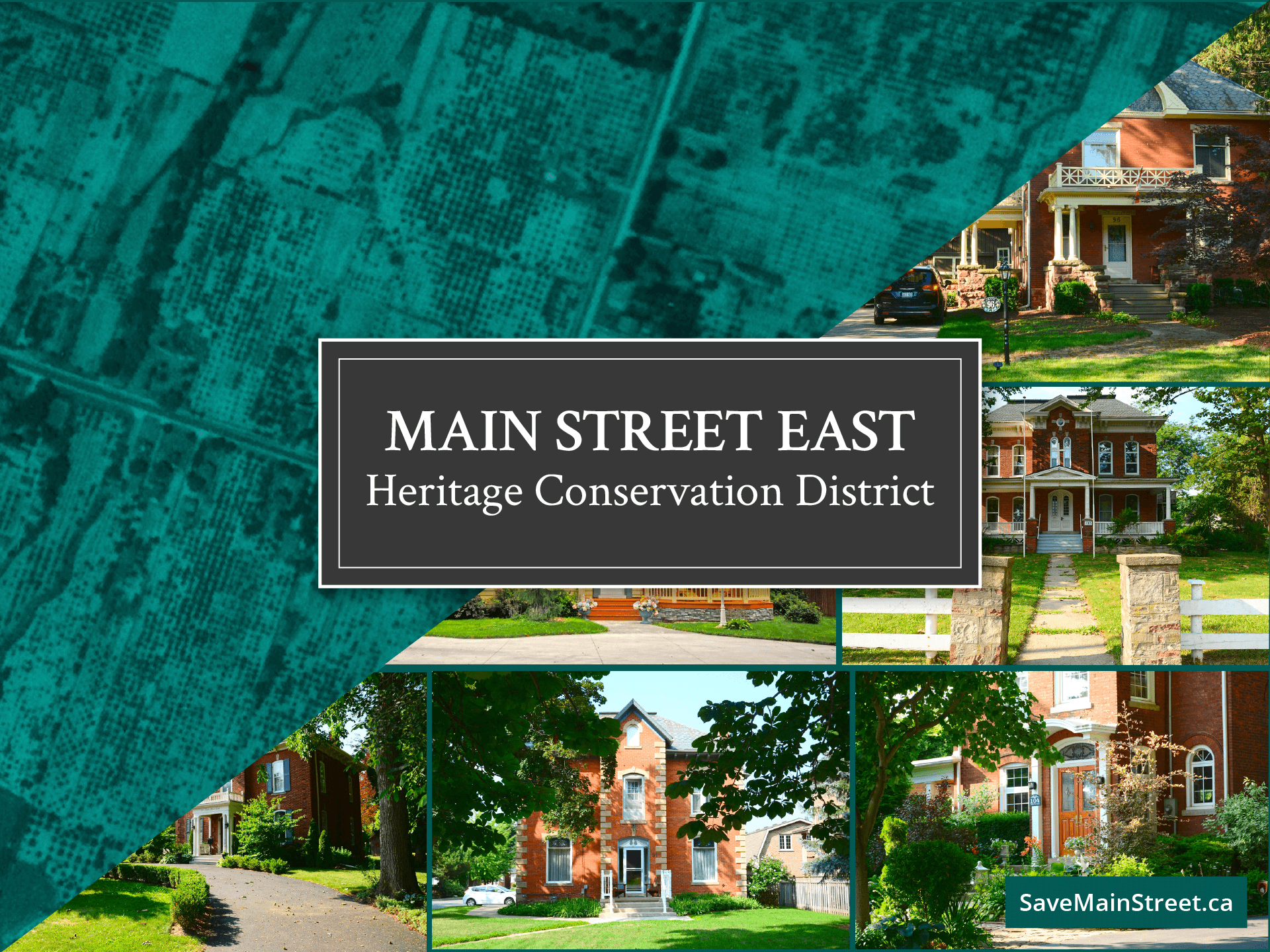 Tonight, the future of Main Street East is in your hands. You are about to make a decision that will seal the future of our historic town. Only two years ago, when you knocked at your neighbours’ doors asking to be elected, they asked you to stop the development train wreck and tame intensification of the old town 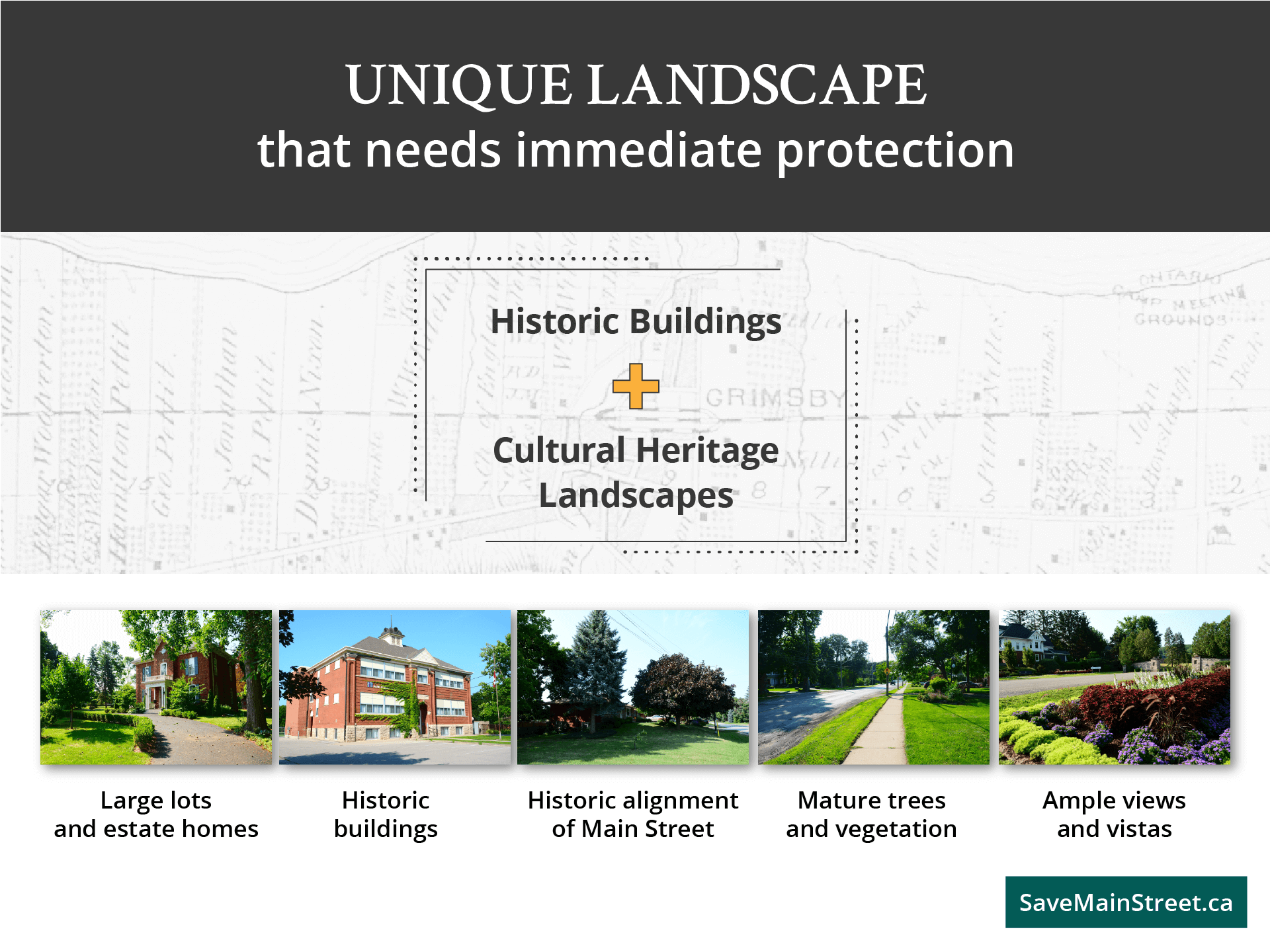 Main Street is a living showcase of Grimsby’s early history. It’s still there. Some of it is intact - a rare find these days. Beautiful estate homes with large setbacks that tell the long history of our prosperous farming industry, mature trees along the road with generous views of the escarpment - they are all part of that character that our community cherishes and out-of-towners love to see. 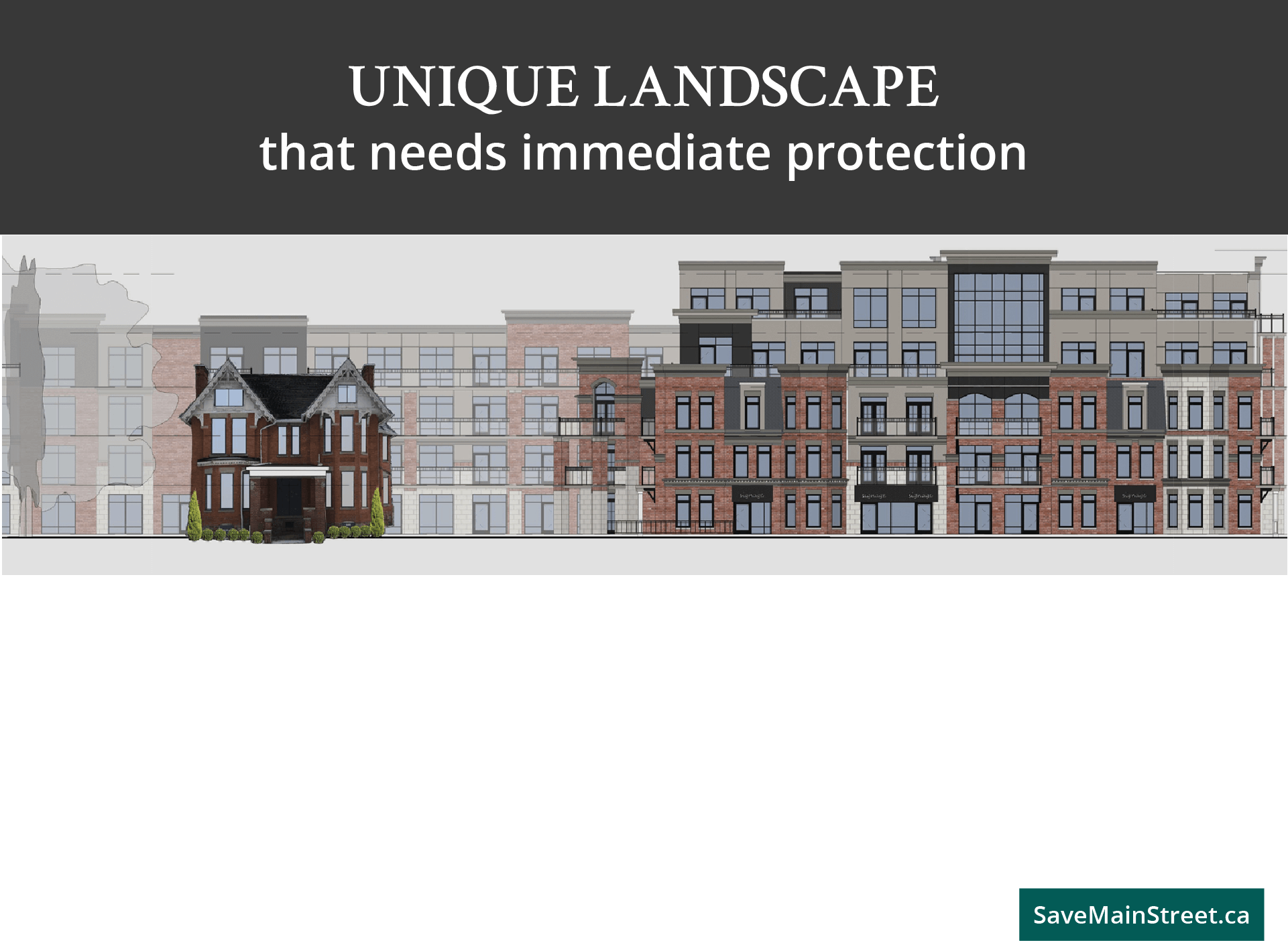 Today, our community is starting to see the effects of development-first decisions made by the old Council. Now, you have a chance to not repeat those mistakes. 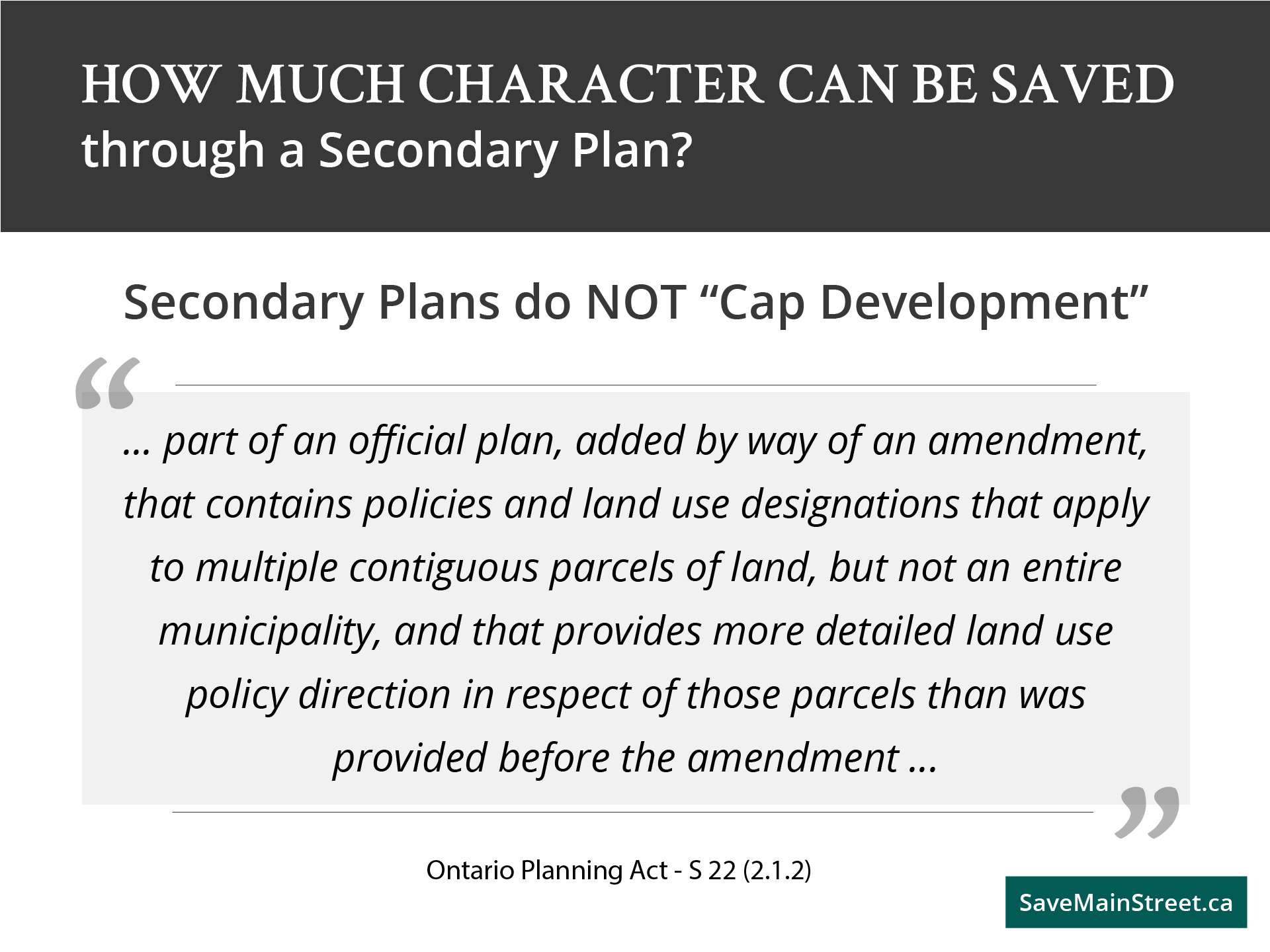 Some councillors appear stuck with wanting a secondary plan for Main Street. A secondary plan, no matter its stated goals, does not “cap development”, especially on main streets which are now recommended by the Province as targets for intensification. 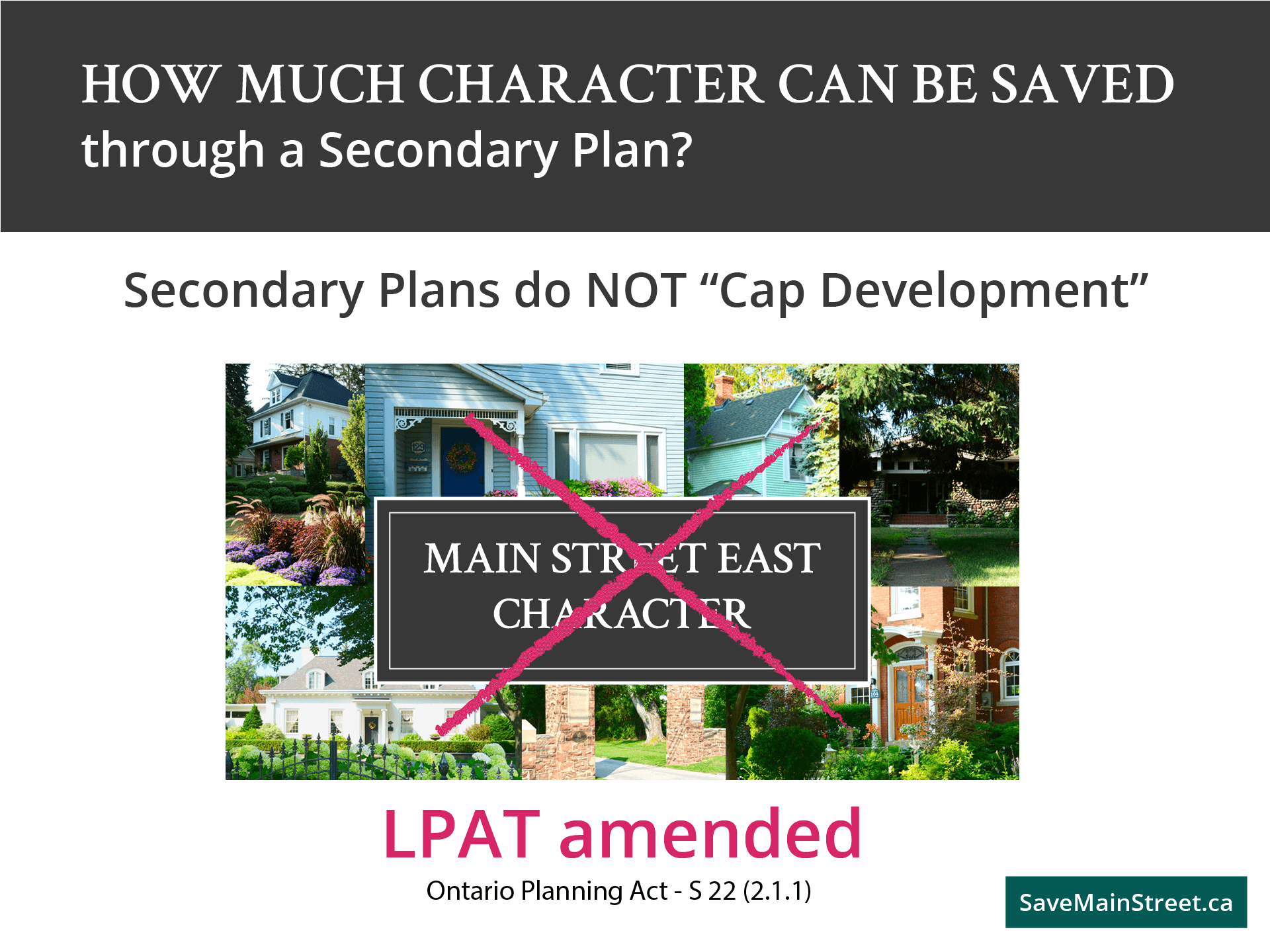 The Planning Act allows developers to request amendments to a secondary plan after only two years. That includes overriding the limits for height, mass, setbacks and land uses. Each development proposal that reaches LPAT will be interpreted and evaluated through the lens of intensification and land use policies along a transit corridor, rather than ensuring first that the proposed development fits within the historical context of Main Street. 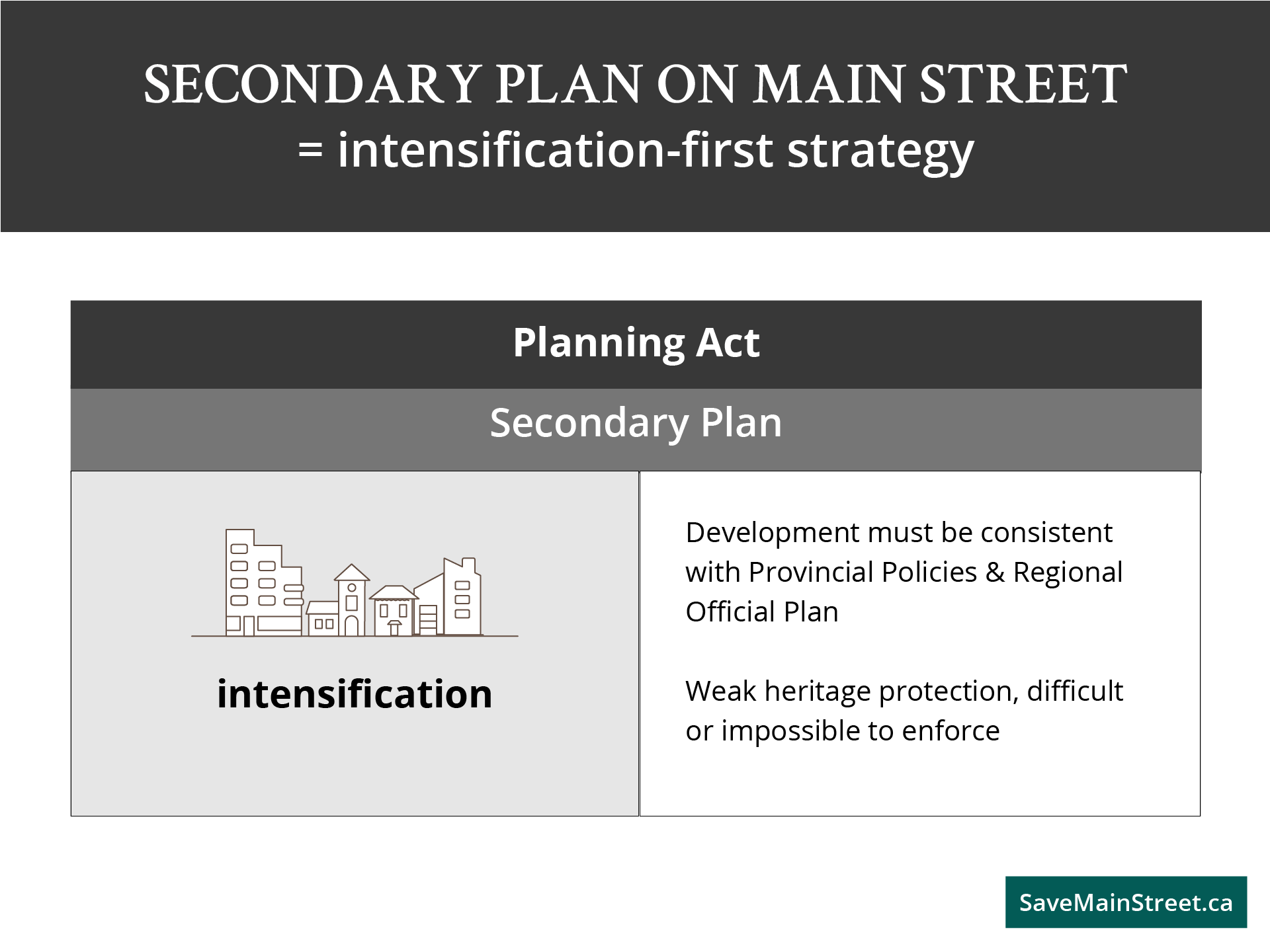 Where secondary plans are implemented, heritage takes a back seat.

Conservation strategies under a secondary plan are impossible to defend long term. They do not supersede concurrent planning policies for the area, leading to inappropriate proposals on larger sites and expensive LPAT disputes with every new development.

For example: the generous setbacks of Main Street East are a significant heritage feature as part of the “Main Street - Scenic Highway Heritage Route” CHL. Once developments reduce the setbacks, the value of the whole Cultural Heritage Landscape is destroyed, forever altering the historic streetscape which is so unique in this area. 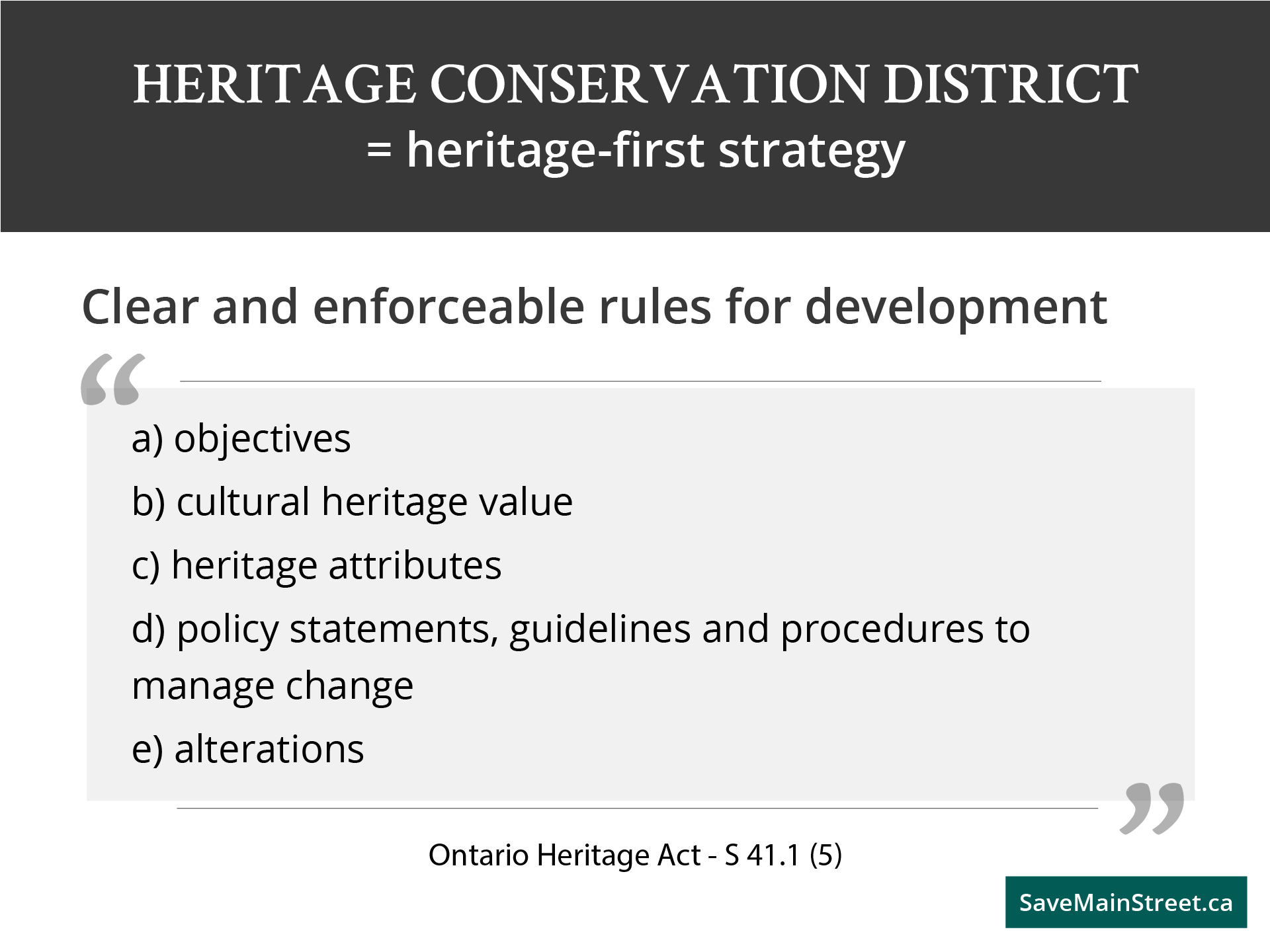 On the other hand, the Heritage Act is a provincial tool to give communities like ours the opportunity to adopt a heritage-first mindset for future development through Heritage Conservation District Plans.

The Ontario Heritage Act, provides clear direction for conservation and change. Under S 41.1 (5) an Heritage Conservation District Plan must include, among others: 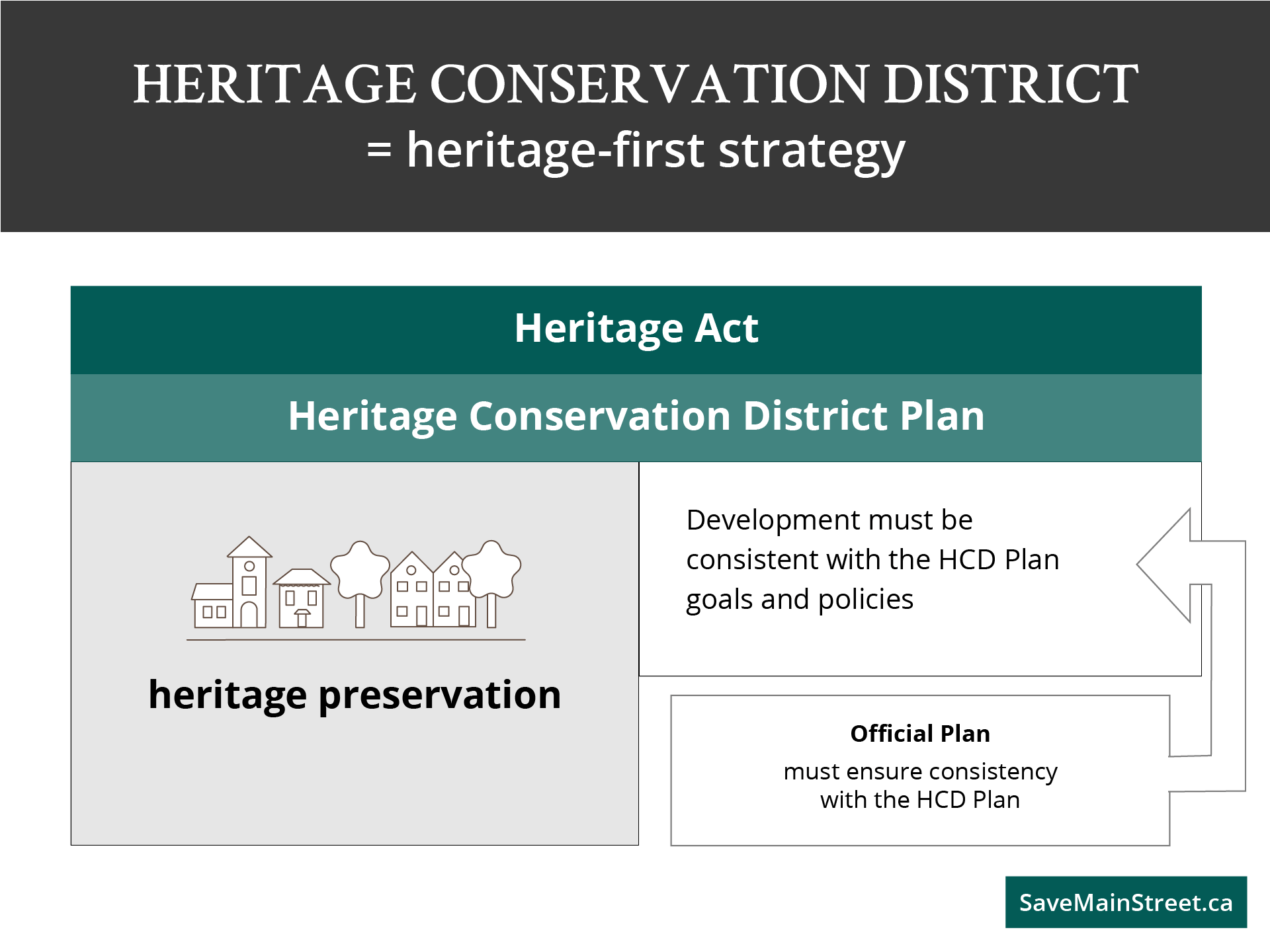 A heritage conservation district does not deter development. It allows development which respects the heritage attributes of Main Street East, and it sets clear and enforceable rules for "compatibility”", "character" and "preservation".

A Heritage Conservation District Plan also binds the Town so that any by-law passed by future Councils remains consistent with the objectives set in the plan. This protects home owners from inappropriate infills on neighbouring properties, and reduces controversy with developers during the planning application process. 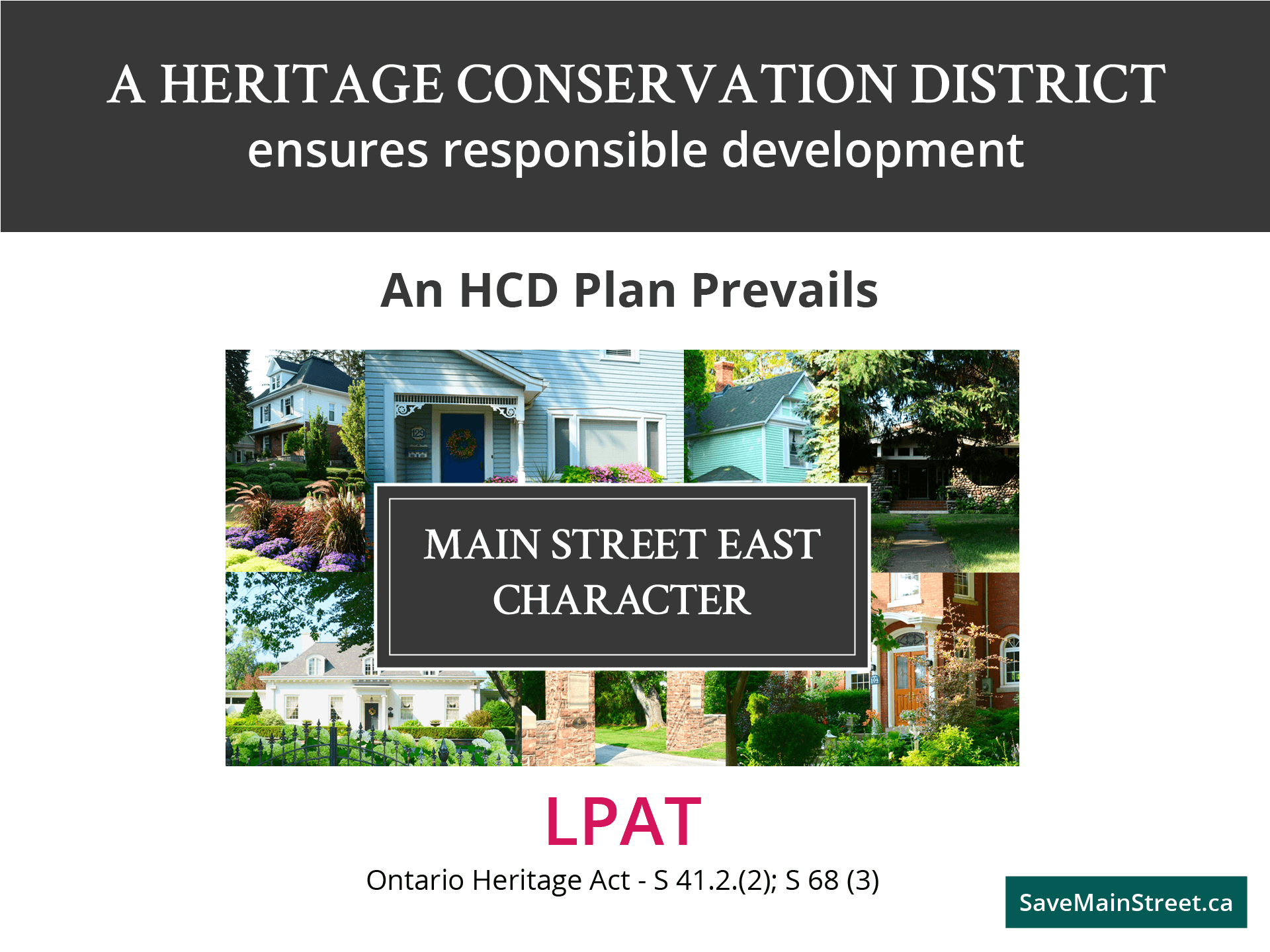 Our community will surely appreciate that. 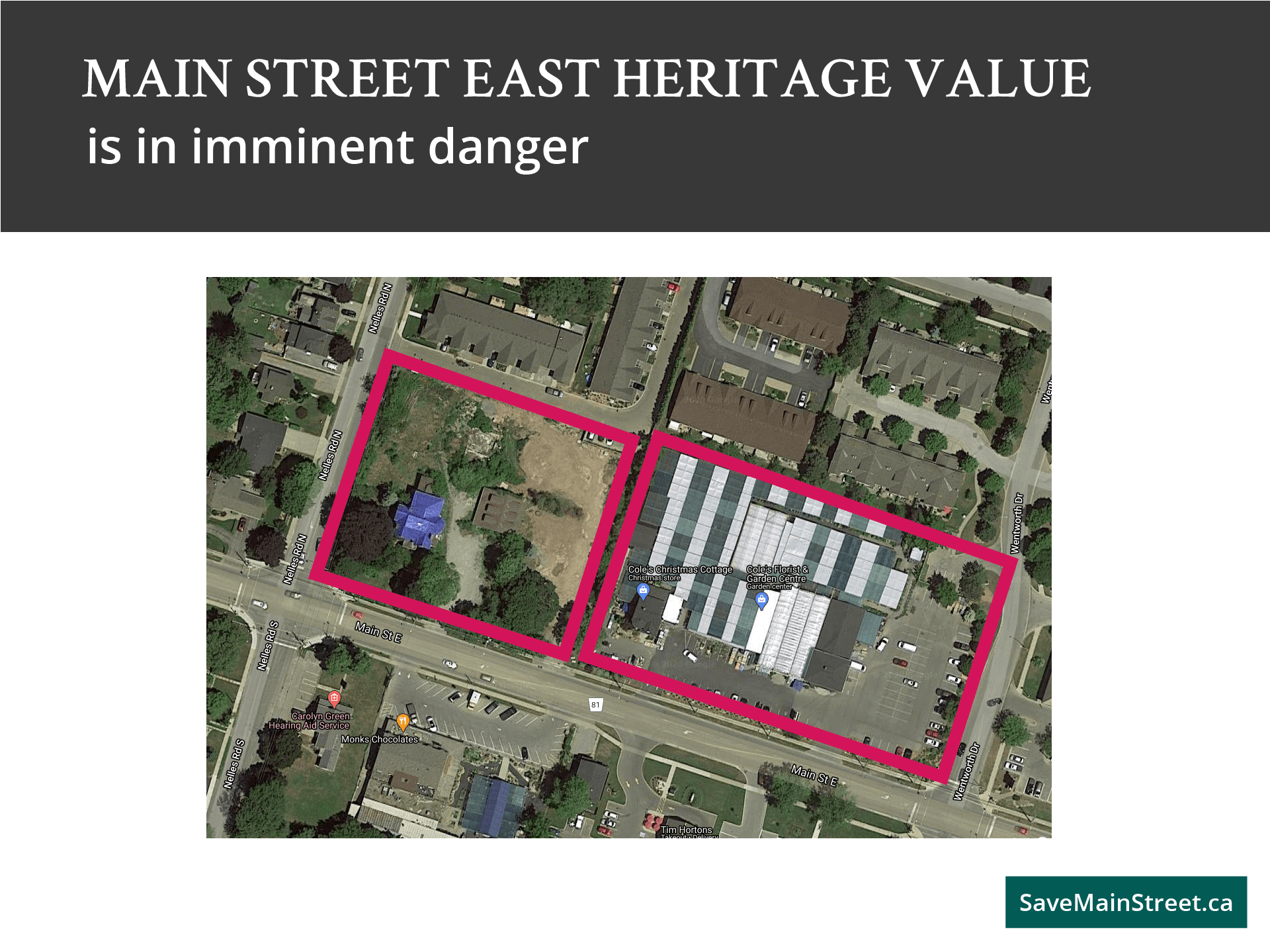 The character of our Main Street is in imminent danger. It’s imperative that the interim control by-law and the starting of the Heritage Conservation District Study be approved tonight. A vote to deny or delay this action is a vote to forever compromise the character of the whole of Main Street East. Now is the time to protect Grimsby's heritage. Your vote to start a Heritage Conservation District Study now is essential to protect the historical value of Main Street East. 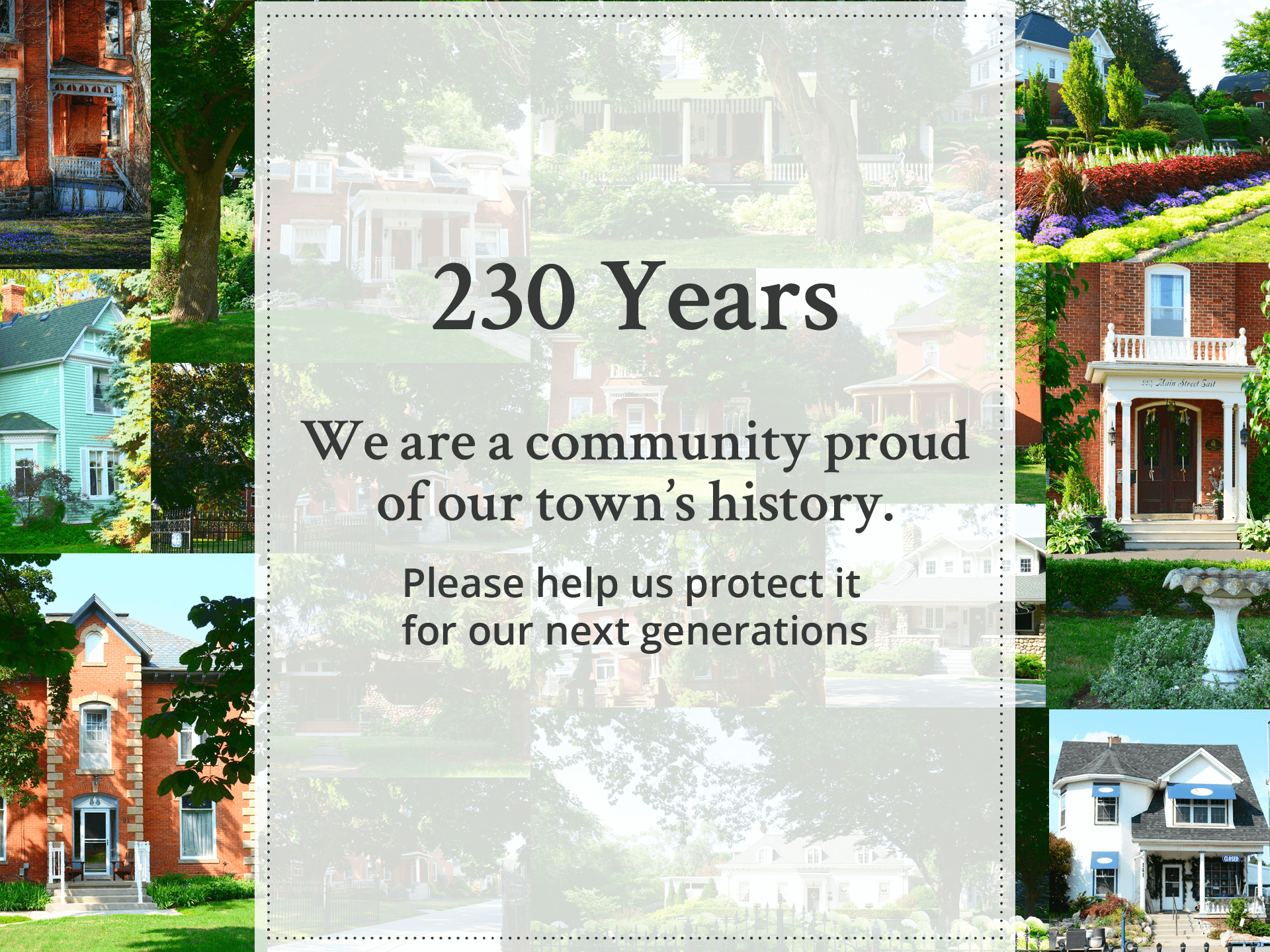 Let’s start on that path now, while it’s not too late. This study will evaluate and document what is important to protect, recommend boundaries of the district, as well as strong, enforceable policies to guide responsible development.

As our town evolves, we need to ensure that important buildings, views, and landscapes are still there and they can be celebrated in their wider context. Just like we can do today, our grandchildren walking Main Street should learn and experience the history of their place, and be able to still see what Grimsby once looked like.