Heritage or Condos?Misinformation spread by Councillor is meant to put developers back in control

Residents of Main Street East got a rare visit from Councillor Ritchie yesterday. He brought them an early Halloween scare-off gift in form of a flyer, in an effort to discourage any attempts to protect this vulnerable neighbourhood from large redevelopment.

It is unfortunate that Councillor Ritchie got directly involved in this gross misinformation campaign that attacks the Main Street East Heritage Conservation Study by-law. This was debated and passed at the Committee of the Whole on October 19th, and will be up for voting again by Council on Monday. Councillor Ritchie could have used this time to suggest amendments to improve the by-law, instead of undermining it to serve developers’ interests.

It is not surprising, though. As he declared directly to us, Councillor Ritchie is firmly supportive of a Secondary Plan instead.

We repeatedly pointed out why a Secondary Plan will do nothing but destroy the streetscape and all heritage character of Main Street East, including in a delegation at the last Committee of the Whole. The president of Hamilton’s Architecture Conservancy of Ontario also sent letters to Council members, with vivid images of the damage that Secondary Plans can do in similar situations. Ancaster’s issues, where soccer fields are severed for potential development and heritage homes left abandoned and demolished, will reach Grimsby’s Main Street too, if council fails to protect the area in a comprehensive manner.

All these facts did not matter to Councillor Ritchie, who has been a big supporter of any large development put in front of Council in the past two years.

However, instead of getting tangled in the web of disinformation stated in the flyer, let’s look at the facts and gain perspective of how this by-law will help us keep the character of Main Street East and battle the powerful developers that are knocking at the door.

23,000 Properties are part of Heritage Conservation Districts in Ontario. And more municipalities plagued by rampant development like Ottawa, London and Toronto are now extending their protected areas at the request of the community.

This makes developers fight very hard to prevent residents from seeing the benefits of living in a new Heritage Conservation District. They challenge districts at LPAT because the rules that limit unreasonable development can be enforced by municipalities. Grimsby’s Main Street East will be their next battlefield.

But the myths circulated by these developers are also rebutted by numerous facts. University of Waterloo did a comprehensive series of studies which are often cited by Planning departments and reputable heritage consultants as irrefutable evidence of Heritage Conservation District success. They show consistently that these areas are more stable and provide greater satisfaction for residents, compared to non-designated similar neighbourhoods. 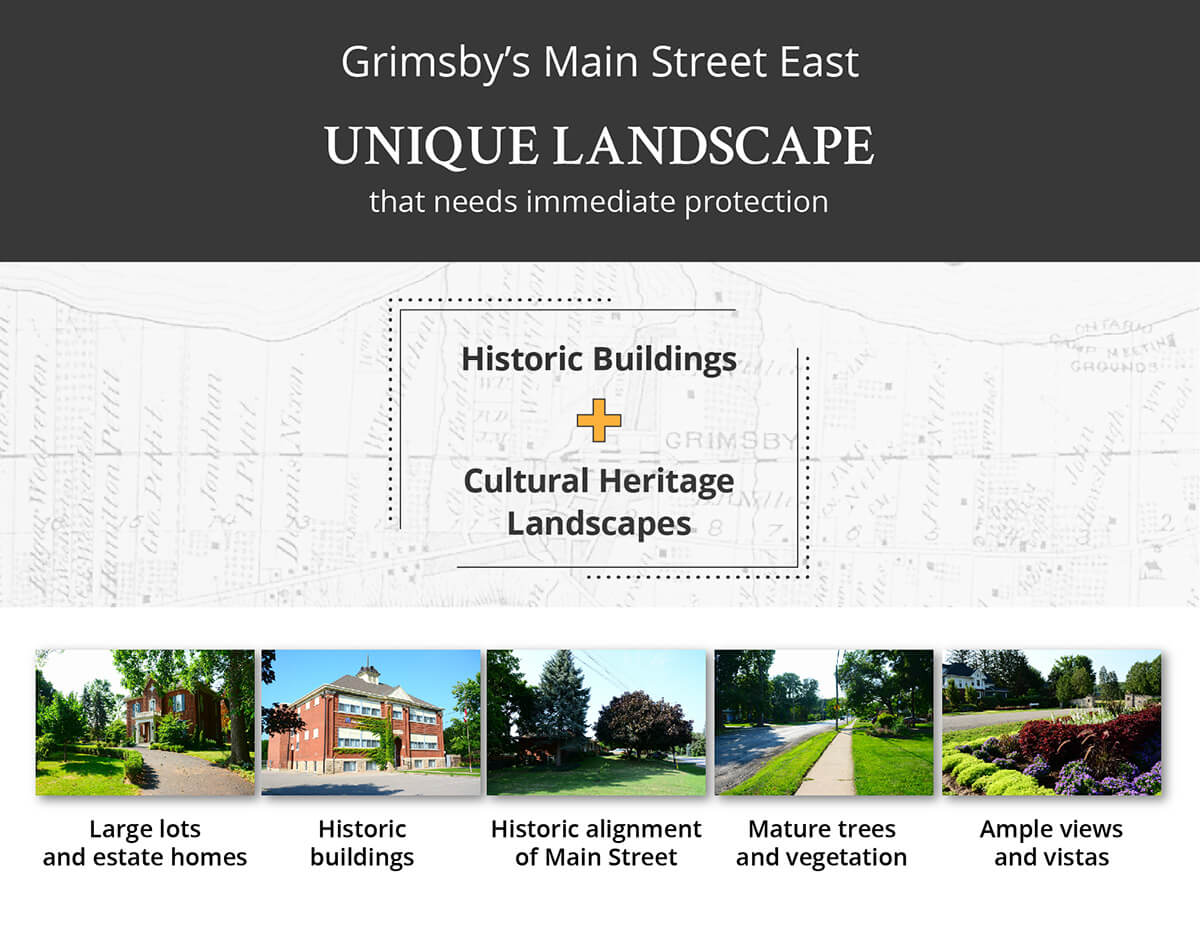 When other Councils go out of their way to protect their towns’ heritage, some of our Councillors choose to undermine any meaningful efforts to do so. All this, with the help of Town’s Planing Department who kept pushing this study at the bottom of their priority list and refused to provide any solutions to move it forward.

In the end, this decision is up to you. With the new Provincial policies that are giving developers more powers over our town, we have no room left in between - it’s Heritage or Condos.

What will it be? Write your Councillors and let them know which kind of town you want to live in.