Is this Grimsby's Main Street?Another ill-fitted proposal is cracking the doors open to overdevelopment in this historical area 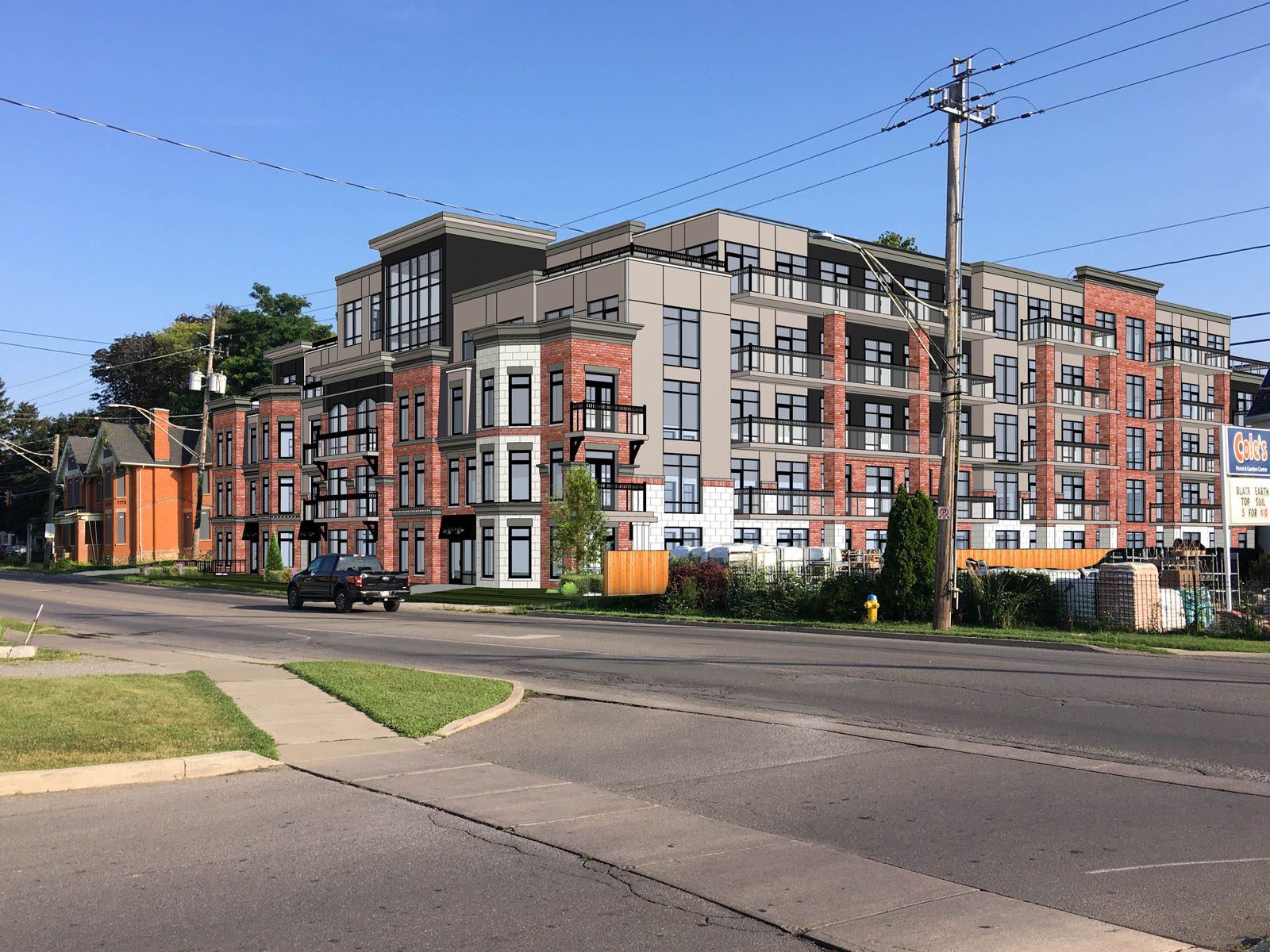 Developer's rendering of the proposed building. Something looks off... is it only us, or was this drawing scaled down?

If you’re one of the many residents who think that Century Condominiums proposed downtown are not a good fit on our Main St., get ready for its twin just down the road, at 133 Main St. East.

This massive 5 storey mixed-use proposed development, recently published on the Town’s website, wants to dominate over the historical character of our Main St. East, with no regards for compatibility with the rest of it (or the neighbourhood around).

The developer and owner of the property, Burgess Heritage Group Inc., wants to relocate the historical house close to Main St., in order to build 148 residential units behind it and at the East side of the property. The proposal includes 205 parking spots both underground and at ground level, as well as 5 lay-way parking spots (road-side). If the move is successful, the historical house would be repurposed for commercial offices. Other commercial space would be available at the first floor of the 5 storey building along Main St. 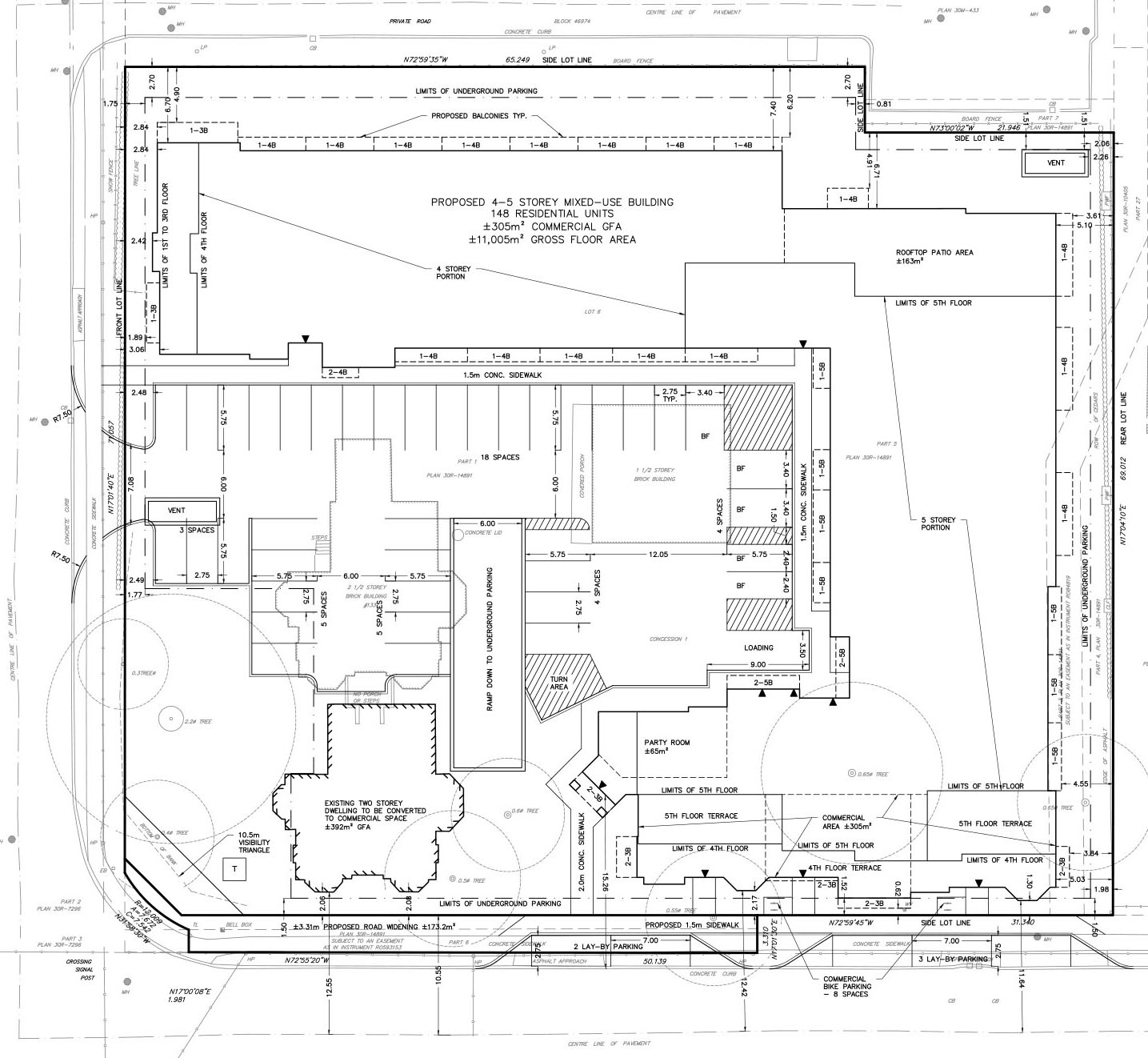 As the construction of mixed-use like this one is not permitted under the current Neighbourhood Commercial zoning, applications to amend our Official Plan and Zoning By-Law were submitted with the proposed development.

The proposed zoning by-law amendment asks for 19 changes, which would alter every aspect that defines the character of this area and its compatibility with the rest of Main St. East: unprecedented height of 17.35m (more than double the current limit of 8.5m!) and density, increased lot coverage with lower minimum setbacks and a more crammed street design. It all adds to a common sight of intensified locations in larger cities. 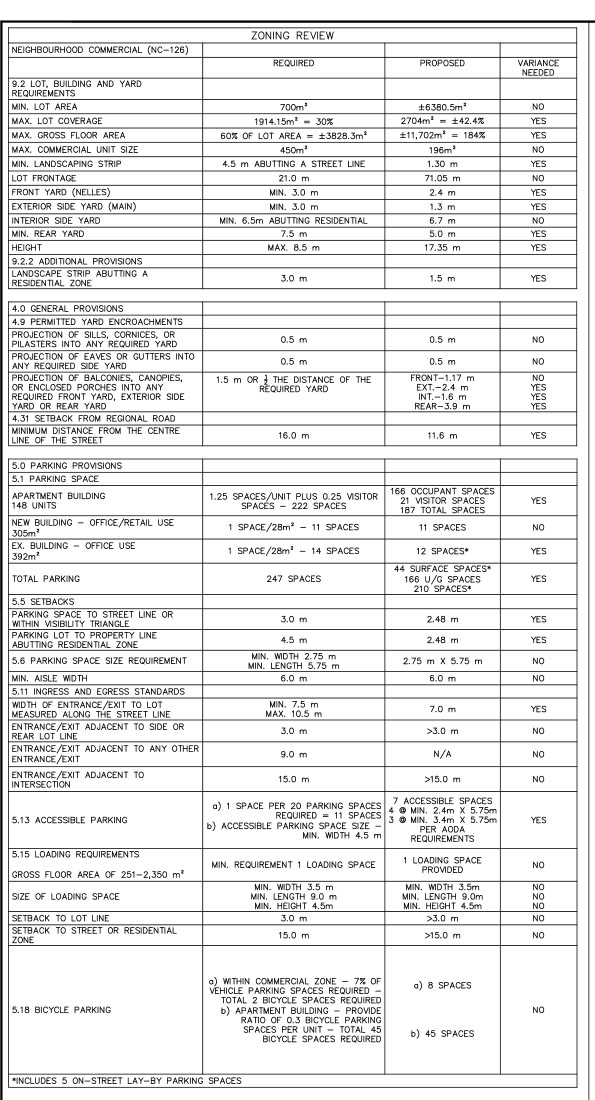 The infamous Section 37 of community benefits is also used “at its best”, to a staggering increase in height and density from the existing limits, in exchange for the “protection” of the historical house. A steep price and a risky “move” in the name of preservation, given that the old house which is listed under Section IV of the Ontario Historical Act, was deemed to be demolished twice in the past.

In an effort to discourage any layman objections, the 100 pages Planing Justification Report prepared for the developer by the IBI Group, is peppered with detailed arguments why this development is “appropriate” and “desirable” for our Main St.

There is nothing else compatible to “anchor” a 5 storey, super-dense mixed-use to its low-rise surroundings, so the consultant argues that this area was previously targeted for intensification by our Planning Department, in the now-defunct Hospital Corridor Study.

The former Study is prominently highlighted at the beginning of the Planning Justification Report. Along with a detailed history of the plan and its “benefits” for our community, the consultant goes even further with a reminder of who voted for or against its termination. If you think this “information” looks out of place and rather hostile against the Councilors who opposed the Secondary Plan, you’re not alone.

You can download the report and all other application documents on the Town’s website, the Current Planning Applications page. It sure makes for a wonderful afternoon read.

A first Open House event will be held by the developer in order to garner your objections and strengthen their case at the Town’s Open House. Notifications will be mailed to residents who live within 120m of the development location, and we expect to see newspaper announcements soon.

To keep up with the latest news about this development, meeting notifications and reminders, please subscribe to our updates or follow our Facebook page at Facebook/SaveMainStreet.ca.

What can you do?

Make no mistake: if approved as is, this application will greatly impact our Main St. East and many surrounding neighbourhoods. More developers will use it to justify higher and denser developments that would mark the end of our historical town as we know it. When all is done, thousands more cars will crowd Main St., and condos will tower over the surrounding neighbourhoods, replacing our open streetscape.

With the new provincial changes of the Planning Act that give unprecedented powers to developers, now more than ever, we need our community united to minimize the damage that will erode the character of our town.

Please spread the word. Tell your neighbours about this development and have them come to the Town’s Open House events. We’ll keep you posted as soon as they’re scheduled.

If you love our Main St. East and want to help us curb overdevelopment along it, drop us a line to get involved!
« Back to all news