Lesson from AncasterDestruction of a village gem 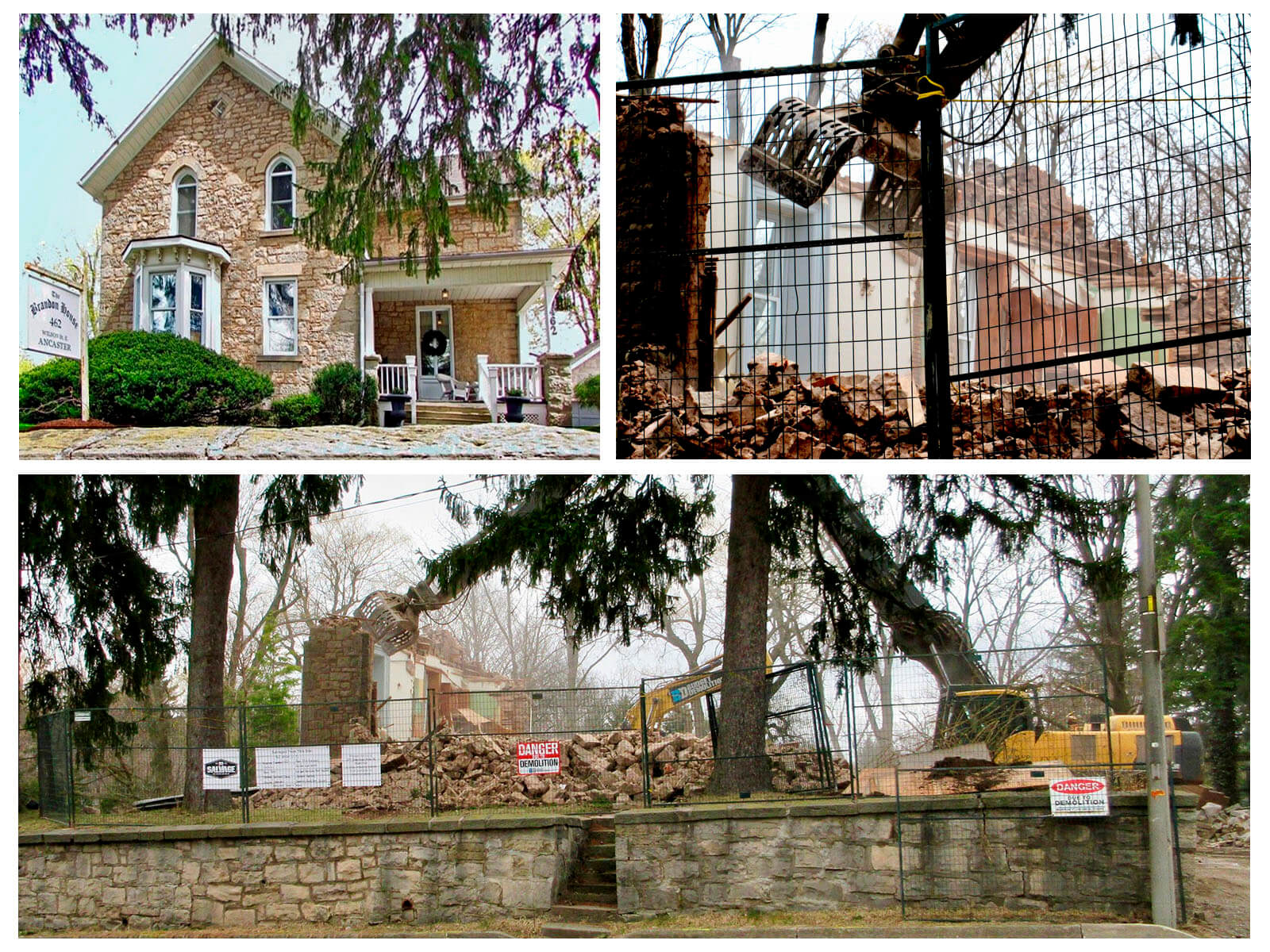 From issues with Planning staff and the Heritage Committee Chair, to zero heritage protection and developer-sided planning policies, this cautionary tale from Ancaster sounds awfully close to what's going on in Grimsby.

39 Significant Cultural Heritage Landscapes were identified throughout Grimsby five years ago. But strong heritage protection from inappropriate development has been pushed very low on the list of priorities at Town Hall so far. Therefore a wealth of history keeps being erased piece by piece until nothing is left of Grimsby's special character and identity.

As the author points out, "Brandon House was the straw that broke the camel's back". How far are we willing to go down this path and what would it take, before the majority of our Council gets serious about protecting our historical town?

The article was originally published by the University of Waterloo's Heritage Resources Centre and written by Shannon Kyles, former architecture professor at Mohawk College and owner of ontarioarchitecture.com.

We thank both for allowing us to republish this story on our website.

This tale from Ancaster raises questions about what is happening to Ontario’s smaller cities and towns.

Ancaster, founded in 1793, is the third oldest town in the province. By the turn of the twenty-first century, it was still considered an oasis in the Hamilton area landscape. Tree-lined Mid-Century suburbs had fanned out from the charming main street. Old stone farm houses, taverns and inns mixed with opulent late 1800s/early 1900s residences became surrounded by wartime bungalows, split levels, and increasingly modern homes. Ancaster had become a bedroom community for McMaster University and its Health Sciences Centre. It was a small town that worked.

Ancaster’s main core was still relatively intact due to concerted efforts by the town council and mayor. Citizens, business people and politicians were proud of the restored mill with its fine dining, the Town Hall, a perfect backdrop for photos, and the town’s “Heritage Day” celebrations which focused on the main street, Wilson Street.

One of the gems of the town was Brandon House, a landmark Victorian farmhouse at the north entrance to Ancaster. It was part of local historic walking tours, listed as a major sight-to-see while shopping, and was a focus of the Heritage Parade. 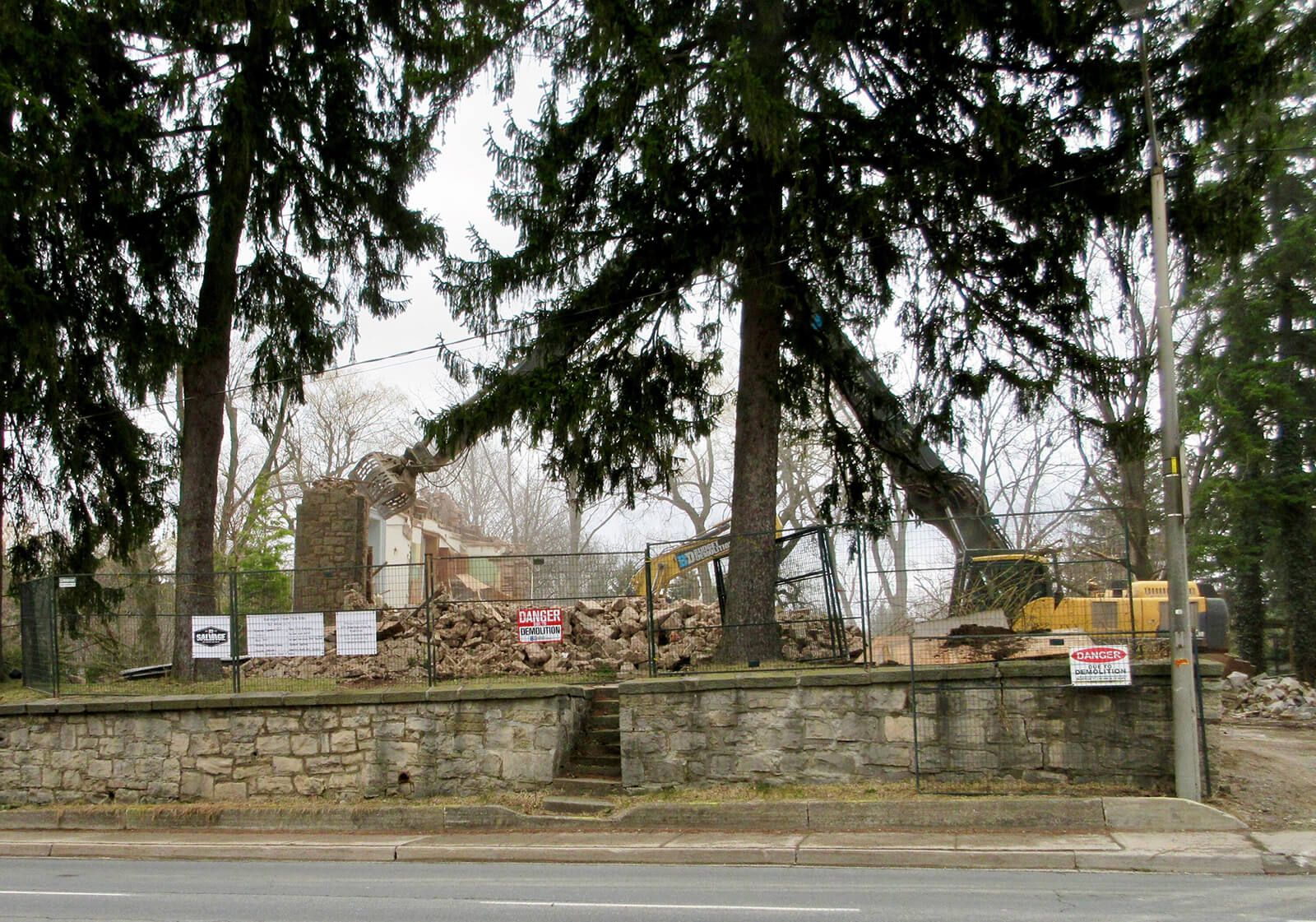 So when Brandon House was demolished in the first week of April 2020 social media erupted in tears and rage.

Many people had assumed that their main street was safe. They were sure that maintaining local character was good for both citizens and tourism. In fact many people had moved to Ancaster to be part of what could be seen as a “small town.” There had been grumblings and discontented murmurings as small buildings were replaced by huge, multi-storey residential units, or by nothing at all and left as vacant weedy lots — but Brandon House was the straw that broke the camel’s back.

As a key residence on Wilson Street, it had been identified as an important historic building by the Ancaster LACAC (Local Architectural Conservation Advisory Committee) prior to amalgamation.

With amalgamation with Hamilton in 2011, the LACAC groups who advised the old town councils were disbanded and a Hamilton Municipal Heritage Committee (HMHC) established. Instead of having five to ten dedicated local people presenting to their neighbours, you now have 11 volunteers from the Greater Hamilton area who report to the City of Hamilton Planning Department. The current leader of this group works for an architectural firm that does development.

Post-amalgamation Brandon House, like most other Ancaster buildings, was put at the bottom of the heap in the City of Hamilton’s Inventory. It was never even listed, let alone designated.

Before a property is designated a Heritage Impact Assessment including a cultural heritage evaluation is provided by an Inventory research group who report to the HMHC. Members of this group are all volunteers. The city then hires a consultant to complete a designation report on the property.

Constraints in this process are clearly time and budget. One early historian noted that prior to amalgamation she charged $50 for the documentation to designate. Now the consultants get $20,000 per report. Consequently few reports are done. There is rapid turnover in the hard-working and capable, but junior, ranks of the Heritage office at City Hall. Staff are often hired only on contract. There is no chief heritage planner with either local familiarity or the clout to have an impact.

The final nail in the coffin of Brandon House, and many other properties, was a rewriting of the Hamilton demolition control by-law in 2009. Prior to this, any demolition permit application for a building dating before 1920 was sent to the Hamilton Municipal Heritage Committee for consideration, then brought before council for approval. The new by-law tightened up timelines for building/demolition permits and the new by-law delegated authority for demolition of all but designated buildings to city staff. This cleared time on council agendas and made the process a lot simpler.

At the same time, however, the by-law cleared the path for the “client” to have unobstructed access to unprotected land for development. The process was now a private deal between the developer and city staff. No citizen groups or “heritage people” would be interfering. And in the case of Brandon House, none did.

The salvage companies went into Brandon House the first week of lock-down. Not by coincidence, the wrecking ball came in Friday and this iconic and beautifully maintained house was gone by Sunday.

The new owner, Michael Hendrie, had been inconvenienced by historical groups at another project in Brantford. The timing of the Brandon House demolition prevented interference as citizens were all carefully confined to their homes.

The demolition of this house at the prominent entrance intersection of town, and the proposed demolition of two adjacent buildings, appears to have come as a complete surprise to Ancaster’s councillor. According to his statement to the Hamilton Spectator, he was shocked and dumbfounded. The fact that the zoning had been recently amended for the inclusion of multi-story residences in the area, as he was well aware, did not seem to be significant.

In response to the flurry of protests, the only response given by city staff was that the demolition was completely legal. And it was.

While we are all still reeling from pandemic isolation, is this not the perfect time to reflect upon what we are doing to our beautiful province?

When this is all over, let’s return to a place where we are building better and more pleasing communities rather than cannibalizing towns that are already working well. There is no point tearing down and bloating up existing towns — wrecking their character, destroying pedestrian and cycle traffic — because they are great places to live. By the time the developers are through with them the charm will be gone. The streets will be clogged.

The Ancaster story is far from unique. Towns across the country are dealing with the same push for density. Do residents in large metropolises want to take a drive through the country to discover that all the Victorian towns now look like Mississauga? If not, then now is the time to contact our political leaders and demand that they consider more productive and reasonable development that doesn’t rely on the destruction of the good things we already have.