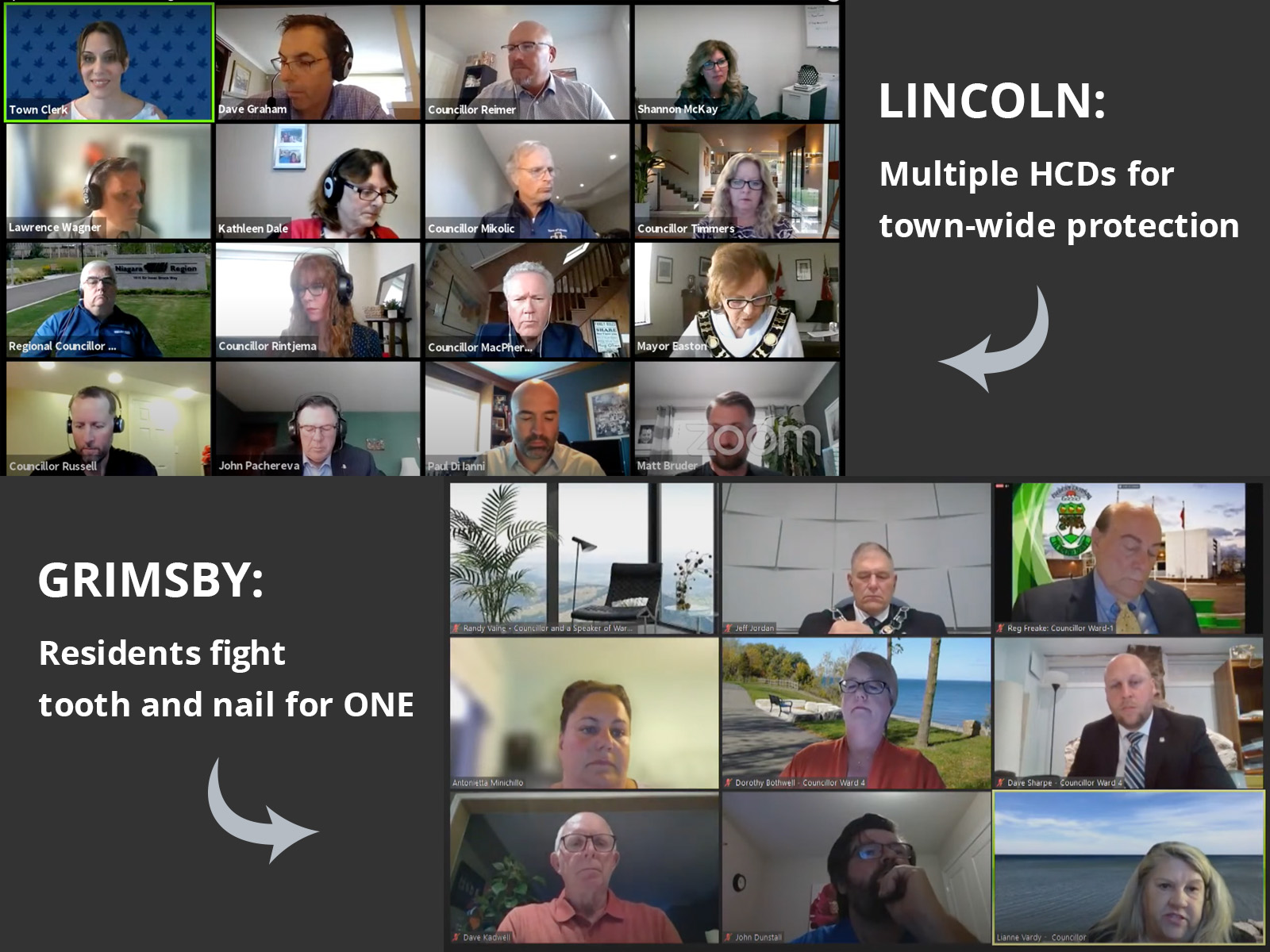 Monday, June 21st, important steps were made by Grimsby and Lincoln Councils in the realm of heritage and character protection of both towns.

Lincoln is making big leaps by unanimously voting to initiate a formal study for the adoption of multiple Heritage Conservation Districts town-wide.

To paraphrase one of our supporters: when Grimsby has so many historic areas that are being degraded every day by redevelopment, we have to wonder what is so “special” about our town that residents need to fight tooth and nail for one?

During the meeting, there were positive remarks and questions for clarification from Lincoln Council members. Among others, Councillor MacPherson praised the initiative and commented that:

"[...] this is a very timely piece of policy, as we all see more and more pressure on our community in the way of development and that it is critical that we have a policy in place that does protect our heritage".

We encourage you to watch the footage of this discussion. There were constructive details provided by Lincoln’s Director of Planning Matt Bruder explaining in plain language how a Heritage Conservation District protects important features of an area, that it does not preclude development but it prescribes and encourages development in character - according to the HCD Plan’s goals and objectives. A big difference from the ambiguous and complex “explanations”, presentations and “solutions” to protect Main Street East given to Grimsby Council by Town’s Planning Department in December last year.

For those who were getting ready for Christmas rather than bracing for another round of Council drama and Planning-created crisis, on December 21st Council voted down 5 to 4 (you guessed who) the HCD Study by-law recommended by the HGAC. Instead, a more vague strategy was adopted. The new by-law includes an HCD study “only if it is paired with a more comprehensive land use planning strategy for the Main Street East area generally […]” as outlined in the Planning’s Report (Meeting minutes).

The study Request for Proposal has not been presented publicly by the Planning Department. However, you can view the document and the plan takers on the Town’s Bids and Tenders portal.

The only company who responded to the RFP was Stantec and it was selected by Planning to conduct the Main Street East HCD study. They are an international engineering consulting firm with offices in Canada, and according to Planning Director Antonietta Minicillo, have established a Cultural Heritage Branch a couple of years ago. A quick Google search reveals some of their work in smaller Ontario towns, including Heritage Conservation Districts Plans for Kincardine and St. Thomas.

This is good news. Since the beginning of last year, hundreds of residents asked Council to prioritize an HCD Study for Main Street East and set the foundation of a protective HCD Plan. An experienced consultant will be able to create one that cannot be successfully challenged by inappropriate development proposals.

Celebrating? Not so soon. Big questions about the direction and results of this study still remain.

Planning fought against the first HCD study by-law and muddied the waters of the new one by pairing an HCD with a land planning study. The Region expressed support for Secondary Plans and failed to welcome a Heritage Conservation District on Main Street. We don’t have the details of the phone conversation between Town’s Planning and Regional staff, but a formal response restating Region’s position is published on the Town’s Document Centre. It remains to be seen how Planning, Council, our Regional Councillor and the consultant will navigate matters, as the Region will be considered among the “stakeholders” in the HCD Study, an eventual HCD Plan, and a Secondary Plan (which they will ultimately approve).

Another questionable detail is the new map outlined on page 37 of the aforementioned RFP. The study area has been extended to include the downtown portion between Ontario and Robertson Streets. It may look like a great addition that completes Main Street East as a whole, but studying just a small portion of the downtown core and potentially making it part of a Heritage Conservation District separate from downtown, does not make much sense. We certainly hope that Planning will follow the Downtown District objectives set in our Official Plan and consider a proper HCD for the whole downtown while it’s not too late.

Section 3.5 - “Downtown District” of the Official Plan sets different policies and uses for Main Street downtown: this is part of a major intensification area and it is zoned for four storeys. The rest of Main Street East from Robinson St. to the East end, has a predominant low density development pattern, remnant of the farm industry that was once prosperous in the area. Streetscape Design policies in the Official Plan also separate the two Main Street East areas - within and outside downtown.

It is of big concern that amalgamating a portion of the intensification area in downtown with the rest of Main Street East, could result in HCD goals and policies that promote similar intensified development in the commercial area surrounding the Hospital and potentially throughout.

Typically, it’s up to the firm doing the review to decide on the historical merits of an area, and they can choose to include or exclude areas in the study and their recommendations. It is our hope that they will encourage protection of character in true form and meaning. With developers pulling in the opposite direction, no doubt this will be a difficult task.

There is also the issue of the duration of the study, with two high density development applications at 133 and 141-149 Main Street East that are now at LPAT. During the discussion about the selected consultant, Councillor Bothwell asked how will the study impact these developments. The response from the Planning Director was that it won’t, unless an HCD Plan will be implemented for the area. The timeline for the study completion is 10 months, with another 10 months to develop an HCD plan. Twenty months is enough time for LPAT to make a decision in either of these proposals. Had Council expedited this study 14 months ago as requested by residents and HGAC, Main Street East would have been in a much better situation than the current one.

And there is of course the issue of unwarranted statements made by Planning staff, which seem to set the cards in developer’s favour.

This recent one made in the staff report to Council for the new Hospital site-plan, raised eyebrows with Councillors Bothwell, Vardy and Vaine:

"The proposed building is consistent with the scale of the commercial properties on Main Street, Deer Park Villa and the existing hospital".

Expressing concern, Councillor Vardy asked Planning if language in the report can be revised:

"I think that we all want the Hospital, we all accept how tall it's going to be. But I wouldn't want language in that site-plan open us to other buildings that are similar in height because it's not something that we want for the area. Most of the homes in the area and the commercial buildings are one and two storeys, so is it possible to revise that language just so it doesn't provide a slippery slope for future builds? I'm fine with the hospital, but to use that kind of language to say that it fits in size and scale, I don't agree. I think it's a bit misleading when you look at what's actually around it."

Planning maintained their position (and language) stating among others that “the report is done” and there should be no consequences because “the site is unique in the area”. We certainly hope that the explanations provided hold at current and future LPAT appeals. You can view the discussion here starting at mark 4:23:00.

We are anxious to see this study finally started. The Town will offer opportunities for community engagement likely in the form of surveys and open houses, similarly to the Grimsby Beach study. Your input and participation will be paramount. Please follow us on Facebook and share our page with your friends. We’ll keep everyone updated.