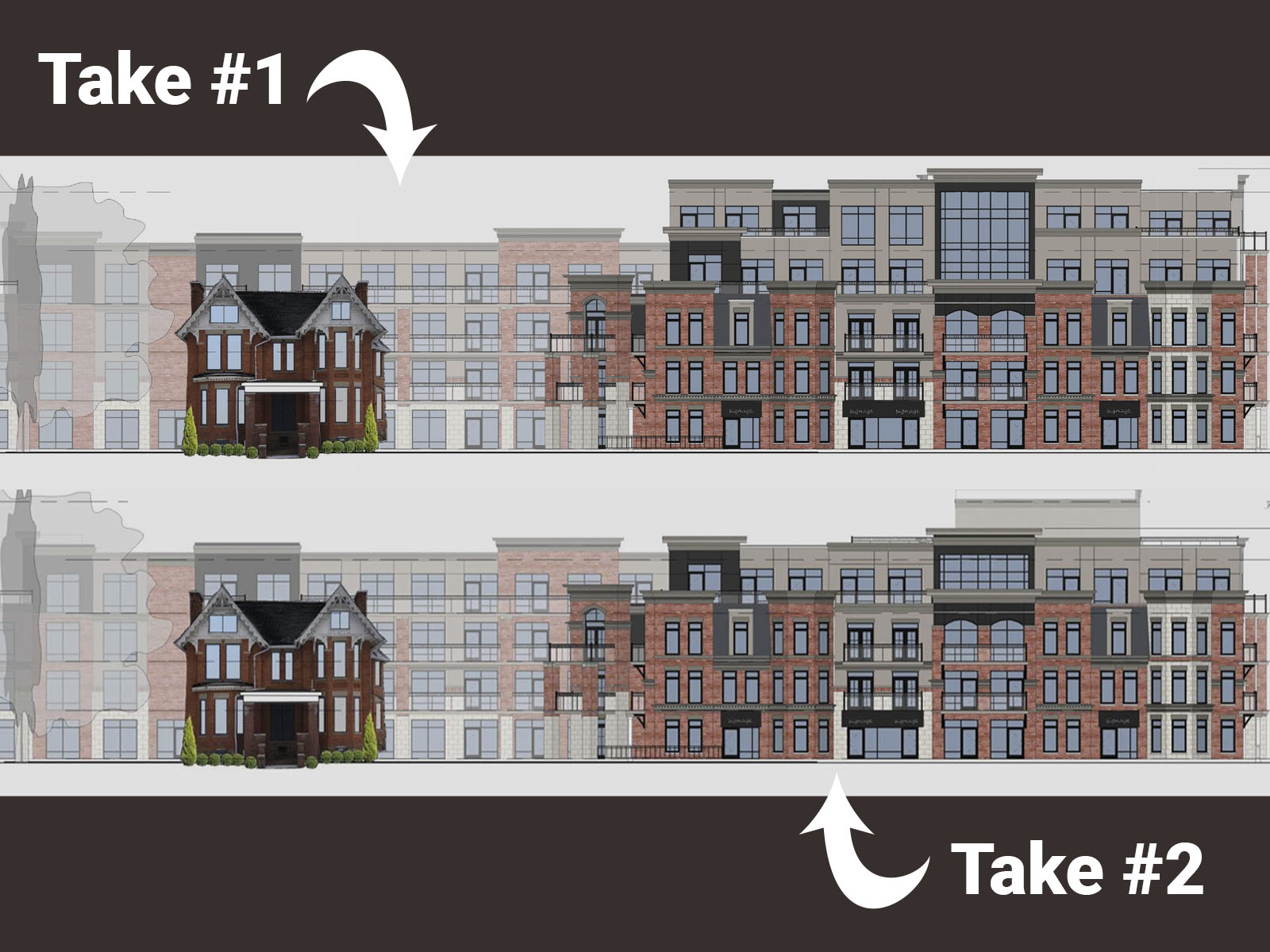 There was a great turnout at the Town’s Open House last Tuesday December 10th. 160 Residents filled the room to full capacity, causing Town Staff to close the doors to those who didn’t make it there on time to get a seat.

For those and others who couldn’t attend the meeting, here are some highlights of events.

Perhaps since this Open House was pushed for some reason well in the Holiday’s season, Mr. DeSantis felt “generous” and thought to make an impromptu adjustment to his application, leaving all those who prepared a detailed feedback pretty much out of words. That could have been a good thing if the declared intention of creating a desirable development for our community, respecting the character of a historical street and low density neighbourhood, matched the reality of his new plan.

The modified proposal features the same massive construction, now four storey high, with 137 units (between 500 and 900 square feet) and 187 parking spots. A slight improvement, but still a long way to go as some residents and Planning Committee members commented.

The only significant change in the new plan is that the historical house wouldn’t be moved to make room for underground parking. Instead, the modified underground parking garage for 150 cars would be built right up to its foundation on two sides.

A small area of lawn would be left at the corner with the Nelles intersection in an attempt to simulate a “civic square” and buy some nods from our community. Mr. Ariens of IBI Group, the consultant company for the developer, said that the “civic square” was modeled after Hamilton’s “Immigration Square”, a favorite green space in front of his office at Liuna Station (the old TH&B Train Station) which we would add, can be called a “civic square” because it is more than four times larger than the DeSantis proposal.

Traffic Mr. Ariens claimed, would be better with this revised design now that only 150 occupant parking spots instead of 166 would be created. Furthermore, the reduction of occupant parking per unit from 1.12 to 1.09 was well supported in consultant’s opinion reasoning, “because Nelles Estates is in a more urban setting and is less car dependent” than Mr. DeSantis’ AquaZul - which is close to the future west Grimsby Go station.

In the heritage attributes section, the IBI group thinks that the three storey line fronting Main Street would mitigate “the impression of overall height”. In other words, we’d see a four storey condo just as high as the historical house and we won’t even notice how much the rest of it doesn’t belong on Main Street or the surrounding area.

At the end of his presentation, Mr. Ariens took offense with the strong opposition led by our group, hoping to damage our credibility by giving us a bad name at Town Hall. Our awareness campaign at the Developer’s Open House was triggered by problematic references to the Planning Act in the notices sent to area residents, which would mislead some into believing that they’re attending an official Open House organized by the Town. The developer was annoyed that we encouraged people to give feedback at the Town’s events, where they could be recorded properly and included in the Planning recommendation report.

Case in point: no item from the resident feedback at that meeting was truly incorporated in this new design, other than leaving the house on its original site. We may say that this was the plan all along, as the obvious purpose of relocating the house was to extend the underground parking lot at a staggering cost, which then needed to be “covered” by the development all around, as Mr. DeSantis told us at that meeting.

Community feedback was as expected: this new design is a step in the right direction but it’s still major intensification, not appropriate for an area that is part of the Heritage Highway and surrounded by many other heritage features. Massing of the building, major traffic issues and insufficient parking were brought up.

A Main Street East resident told the developer that her historical house was 150 years old and her family had spent 20 years renovating it. Yes, there are plenty of beautifully restored historical properties along Main Street and the owners did not need to build hundreds of units around them to justify restoration costs. This is what true respect for a community and its history looks like.

Comments from members of Planning and Development Committee were also not flattering to the new design.

Councillor Dave Sharpe noted that the density of this new proposal is more than double high density zoning limits, and three times over the Neighbourhood Commercial zoning limits.

Councillor L. Vardy asked why the density and height comments from the Developer’s Open House were not considered in the new design, and what would it take for Mr. DeSantis to do something nice.

Mr. DeSantis personally addressing the audience argued that he reached out to the community, but the community didn’t reach out to him. He is proud of his product and he is moving forward with his vision.

There is no question that this developer is fully aware of the community’s vision for Main Street, as well as its wish for a responsible development direction within our town. It has been brought up directly to him at both meetings, clearly visible on so many yard signs spread throughout, stated in our Official Plan, Zoning By-Laws and now re-enforced in the Council’s new Strategic Plan.

There are plenty of strong signals and even suggestions from the community in rebuttal to Mr. DeSantis’ vision. As one resident clearly said, because this is beyond what our Official Plan and Zoning By-Law allow for the area, development of this sort is not a right. Mr. DeSantis may be asking for a buy-in from the community but perhaps he’s just too far removed from our community’s values to bring forward an acceptable workable plan.

Here is a copy of the IBI's presentation:

(If you can't view it directly, you can also access the presentation here)