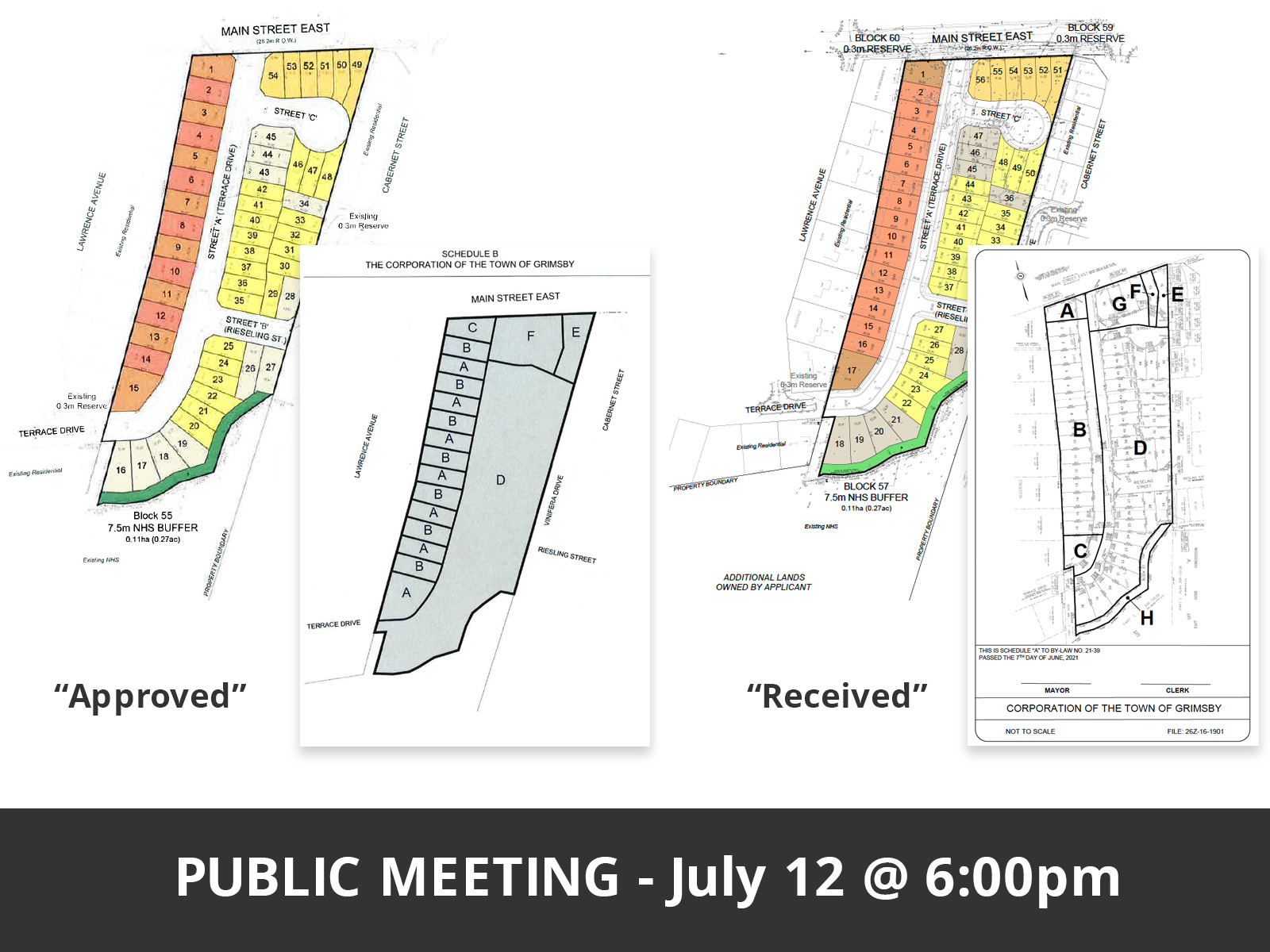 The development at 314 Main Street East will get a second public meeting on July 12th, after residents and some Councillors did not agree with Planning’s recommendation to approve additional zoning by-law amendments for the Branthaven subdivision without public consultation. The issue came to Council on June 7th, in form of a report stating that the proposed changes are “minor in nature” and another public meeting was not necessary.

For those less familiar with Grimsby’s historic profile, this property belonged to the prominent Moore family, one of the first European settlers in Grimsby and heavily involved in town’s government and affairs. John Moore was a member of the first municipal council in 1790 and served as the first Clerk of the township. His eldest son, Johnathan Moore, was elected to town council and was a founding member of the Masonic Lodge in Grimsby. He was first elected Treasurer and served as Union Lodge Master in 1802, 1809 and 1810. The Moore homestead on Main Street East served as a meeting place for the Union Lodge during this time.

Given its significance, the house was listed in the municipal register in 2016 and it met three of the criteria for designation. However, in December 2017 staff did not recommend protection under the Ontario Heritage Act, and so a demolition permit was issued. In 2018, an application for a rezoning was submitted and a Statutory Public Meeting was held in September 2019.

On February 25th, 2020, at the (former) Planning & Development Committee meeting, Planning staff presented their report to recommend the approval with conditions of a revised rezoning application and 54 lot draft plan for the new subdivision. The resolution from the P&D Committee to Council was made based on the presented report and draft plan:

1. The draft plan of subdivision be approved, subject to the conditions attached to this report as Appendix "A";

2. The draft zoning by-law amendment attached to the report as Appendix "B" be forwarded to Council for approval following the submission of a revised draft 30M plan and a list of frontage and areas certified by an Ontario Land Surveyor; as amended to require the zoning that is proposed for Area B apply to all of lots 2-15 inclusive; and

Condition 2 was requiring the applicant to amend the site plan that all 14 new builds rearing Lawrence Avenue to be bungalofts, with the intent to lower the adverse impacts on the existing neighbourhood. Another condition in the report was limiting the removing of the vegetation during the nesting season, as a compliance requirement with the Federal Migratory Birds Convention Act.

Sounds straight-forward? Well, this is when things start taking an interesting turn.

At the next Council meeting on March 2nd, 2020, a delegation representing the developer appeared with a new draft plan of subdivision. The delegation included a drawing dated February 27, which now had an increased number of units from 54 to 56, with 16 lots rearing Lawrence Avenue and a reduction in their sizes. Although it was not made clear, the new plan would have required an upzoning of 15 of these lots to RD4 instead of RD3 that was conditionally approved just a few days before at the P&D Committee meeting. The delegate marketed the new plan as an improvement because smaller building footprint would allow more green space at the back of the units.

There was no revised zoning amendment or other staff report that would evaluate the changes presented to Council at the March 2nd meeting. Although the new idea was well received by some members of Council, there was no action taken to endorse or approve it:

Consequently, Council approved the resolution based on the initial plan of 54 units, together with the other minutes from the February 25th Planning and Development Committee meeting.

Things sat quiet until May 27th this year, when bulldozers started to clear cut the site in the middle of the nesting season, in contravention with the condition attached to the site plan approval and with the Federal Migratory Birds Convention Act. Residents alerted the Town and staff was sent at the site. However, no stop work order was issued and the developer continued the cutting undisturbed. The story was covered by NewsNow and NiagaraThisWeek.

Roughly a week after the event, at the Council meeting on June 7th, Planning came forward with a new report to provide recommendations regarding “a Zoning By-Law Amendment at 314 Main Street East”. The proposed changes were presented based on the false assumption that Council approved the developer’s plan of 56 lots on March 2nd 2020. Since the changes in the report outlined adjustments for only two lots, they were considered minor in nature. Therefore, staff recommended that Council approve the zoning amendment without another public meeting.

As Councillor Bothwell noted at the June 7th meeting, there seemed to be more changes than just adjusting two lots. Indeed, the upzoning of 15 lots rearing Lawrence was never made clear in any report.

Interestingly, the same assumption of approved 56 lots was made on the Committee of Adjustment June 15, 2021 Agenda:

"Town of Grimsby Council passed a resolution approving the Draft Plan of Subdivision for 56 single detached dwellings on March 2, 2020.​"

Imagine what would it mean if your delegations to Council were considered automatically approved? When assumptions are made and important details are not clearly presented in reports, how can Council make informed decisions?

The ABCs of a Planning Department that follows Council’s direction should be “Always Be Candid” and “Always Be Competent”. In Grimsby, the “C” must be standing for something else.

The July 12th Public Meeting Notice is published on the Town’s website together with the application documents. If you wish to speak, email Nancy Simon (nsimon@grimsby.ca) no later than Friday at noon.