With the Heritage Study up for a final vote, Planning intervenes to recommend intensification on Main Street EastWhat will Council decide on December 21st? 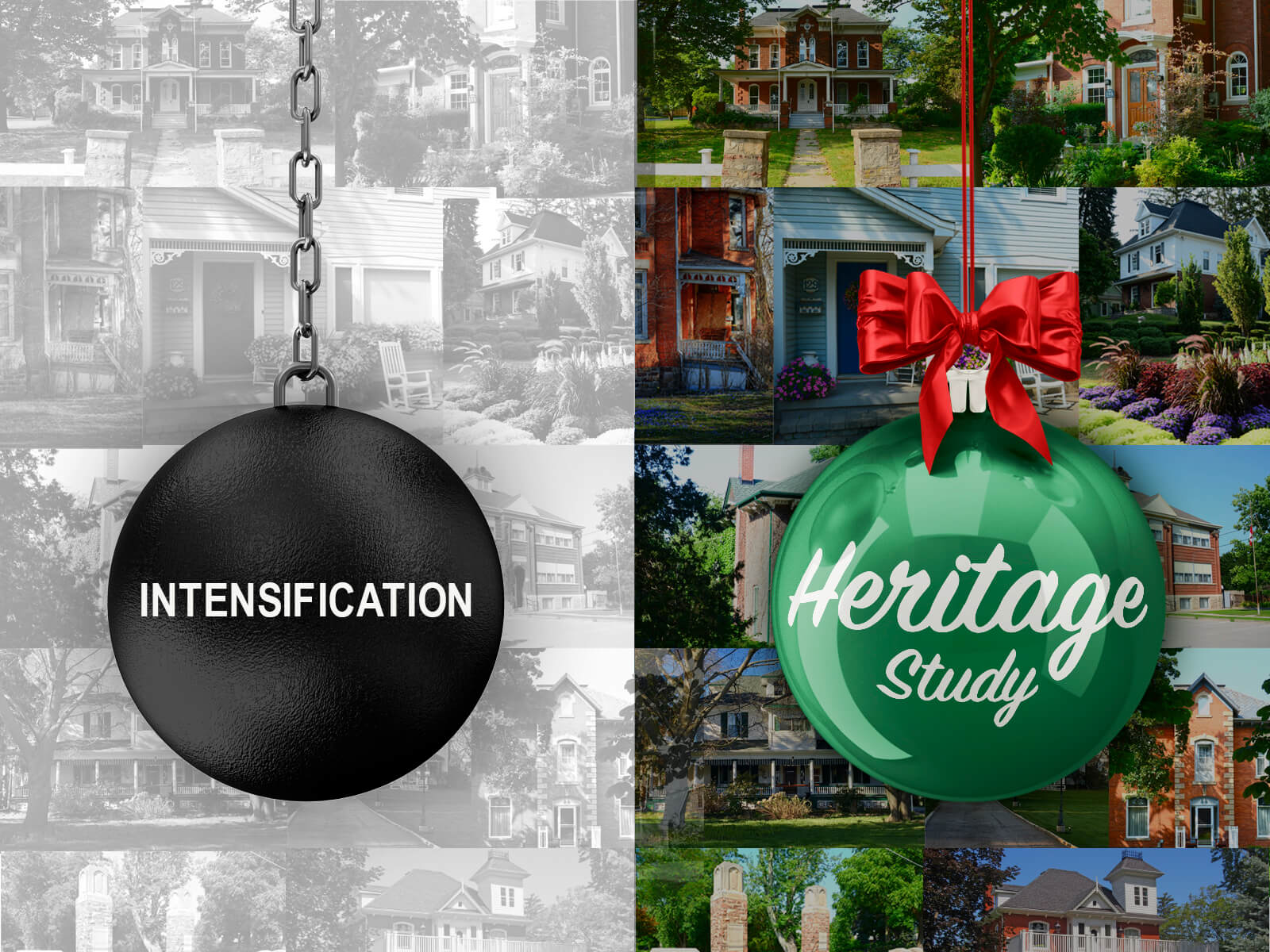 For those who lost track of the twisted path of this heritage study, here is a short summary of how things got here.

Concerned about development and intensification of Main Street East, residents and citizen groups asked Councillors for a study to evaluate the Heritage merits of the area to see if the street could qualify for a Heritage Conservation District (HCD).

Council approved a provision of $100K in the 2020 budget for a heritage study to be conducted.

The Province outlines a simple process for HCD studies: 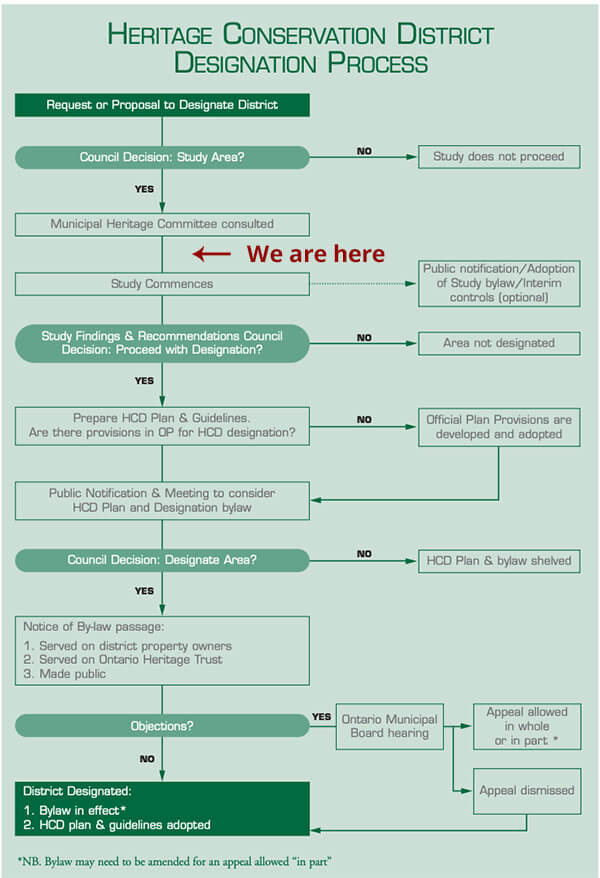 Instead of following this provincial guidance, a disjointed process has been allowed to occur:

Almost three years after the first attempt to introduce intensification in an area not designated for intensification, Town’s Planning staff is bringing back that vision in a surprise report which states that the Main Street East Heritage Conservation District (HCD) study should not proceed.

This report, which is outside of the Provincial process to initiate an HCD study, has been presented at the Heritage Grimsby Advisory Committee (HGAC) meeting on December 8th and will be on Council’s table on December 21st.

Staff had a clear direction from Council for the draft HCD study by-law: to provide input at the HGAC meeting, and bring it back to Council. If it wasn’t for Councillor Bothwell, staff would have just brushed off Council’s direction with no chance of getting the by-law for final voting on December 21st.

Taking advantage of the lawyer present at the HGAC meeting on December 8th, Councillor Bothwell put the HCD study back on the discussion table, but without the interim control by-law which has been exploited by Councillor Ritchie to create confusion and apprehension among residents of the area. The new motion and the by-law were vetted by the lawyer right away and then voted in favour unanimously by the Committee members. We thank Councillor Dunstall who voted for the recommendation to bring the study back to Council.

As Councillor Bothwell noted, there have been changes to the report just prior to the HGAC meeting, with the lawyer acknowledging that he contributed to it. We find it interesting that staff asked a lawyer to contribute to a planning report. This could indicate that matters are carefully crafted to promote their own intentions.

Watch the whole 1h:40min of the discussion, including comments from the HGAC members and the amendment of the study by-law.

Staff’s recommendations should be of big concern not only for residents of the area, but for anybody who expressed their opposition to the level of future development being planned on Main Street East in the past. These concerns were voiced by committee members at the HGAC meeting, after the presentation given by the Director of Planning in support of the report.

Below are a few issues that concerned us most. They offer a clear view into Town's Planning real intentions for Grimsby’s Main Street.

The report minimizes the role of an HCD as a comprehensive tool to protect and guide responsible development. Instead, a complex scheme of multiple “Planning Act tools” is proposed.

As committee member Olia Jurychuk pointed out, "the report does not highlight to Council that a best practice HCD Plan - if pursued after the completion of an HCD study - would encompass a broad range of urban planning and design matters, some of which include traffic, parking, signage, pedestrian realm and other streetscape elements. This is EXACTLY what the Ontario Heritage Conservation District Toolkit recommends in an HCD Plan".

Main Street East is not designated for intensification. So a cauldron of multiple, overlapping planning tools as suggested by staff does not make much sense. It complicates planning matters and leaves room for loopholes, reducing Town’s and resident’s chances of winning any appeals at LPAT. We can’t help but wonder how many residents and members of Council would be able to navigate through multiple legislative frameworks and catch issues with proposed developments that exploit these loopholes.

While the report acknowledges that Main Street East is under development pressure, it does not mention important Provincial and Regional policies that should be implemented to protect historic areas. Instead, it references Regional Official Plan policies specific to regulate municipally designated intensification areas. In Grimsby, these policies apply only to Downtown and the Winston Road neighbourhood, which are our two major intensification areas where most growth is being directed.

So exactly why did Planning inject this for Main Street East which is not a designated intensification zone? For an area that needs protection - the reference to these intensification policies shows Planning have their own intentions counter to Council’s approved plans.

One of the tools that Planning staff does recommend for “protection” of Main Street East, is a Development Permit System - currently replaced by the "Community Planning Permit System" (CPPS) under the Ontario Planning Act.

This framework would establish a single by-law, with minimum and maximum development standards. Once adopted, minor variances, zoning, and site plans are combined into one application and one approval process.

Any development application will have to be approved in maximum 45 days. There will be no notices sent to residents and no public meetings will be held. The system also removes the rights for appeal at LPAT, giving full control over development decisions to designated staff (or Council) without involving the community.

Granted, both developers and residents can appeal the by-law itself before it is adopted by Council. If a developer thinks that the area is under-zoned under the provincial policies, they will surely appeal it and get the maximum benefit. Would residents have the same success at LPAT if they consider the area over-zoned?

Used by the Province to force intensification under Ministerial Orders, this framework is unpopular among Ontario’s cities and towns. In 14 years, it has been adopted only by Brampton and three other municipalities.

As Councillor Bothwell noted in her response statement to this report, "it's noticeable that only four municipalities have enacted CPPS out of 444 municipalities since 2007, while 134 Heritage Conservation Districts have been put in place and continue to grow. Many municipalities have multiple HCDs due to their success. The same cannot be said for the CPPS".

Remember the “Hospital Corridor Study”? This study became one of the focus issues during the 2018 municipal election, with most residents opposing another intensification area being established in addition to the west-end and Downtown.

Why is Planning insisting on a Secondary Plan idea after it has been voted down by Council twice already? Secondary Plans are becoming notorious for not being able to hold their own limits, all over Ontario. When lots are large and inexpensive to redevelop (as stated in the initial staff report and then removed in the revised version), establishing a framework like this will achieve maximum intensification, no matter its stated goals.

(If you’re curious, here is a short explanation of the technical details)

One by one, heritage homes, trees, views of the escarpment, generous green spaces will be lost forever and replaced with mid-rise and high-rise buildings that are now a common sight all around the GTA. Reviving this plan would be a huge mistake with devastating consequences for Main Street East.

5. Relying on individual designations to protect the character of Main Street East

This is described by planners as “hit and miss” because individual designations are notoriously slow and expensive, resulting in character erosion of historic neighbourhoods. For example, as HGAC member Olia Jurychuk mentioned in her comments, in the past 10 years, this Town has designated only 14 properties in the whole of Grimsby.

This strategy is weak when large development pops up next to, or engulfs heritage homes. The proposed development at 133 Main Street East is a vivid example of how Part IV designations can be abused when the rest of the area is regulated under the Planning Act.

As we learned from the staff’s report, Cole’s property at 141-149 Main Street East is next, with a seven storey condominium proposed, despite the historic significance of the two buildings on that site.

The historic value of Main Street East, has been identified in six significant Heritage Cultural Landscapes (CHLs) which were endorsed by Council in 2015: 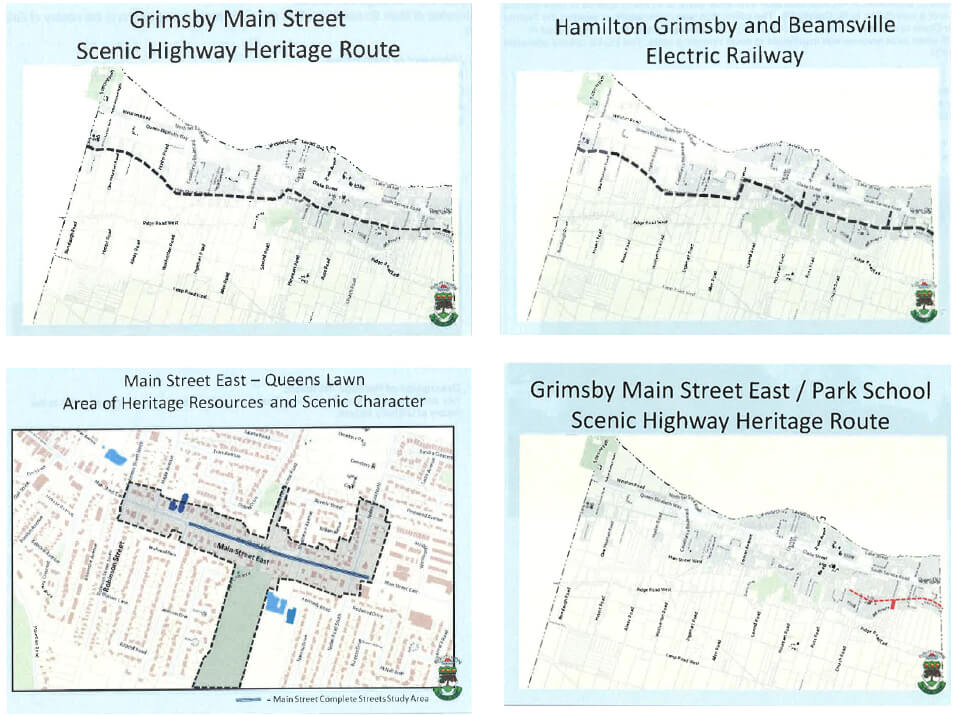 Through the Ontario Heritage Act, the HCD study will evaluate the merits of these identified CHLs. The Act specifies that the final HCD boundaries must be produced based on the study findings, and not set in stone at the onset. If the study finds that they contribute to a cohesive Main Street East, consolidating them in an HCD will ensure that the character they define can be preserved for generations to come.

However, Town's Planning already jumped to conclusions suggesting that only Queen’s Lawn CHL should be taken into consideration.

Erasing all the other CHLs from planning considerations will play into developers hand. This is exactly what Mr. DeSantis did in his planning rationale for 133 Main Street East, to argue that a 5 storey condominium is an appropriate addition and compatible with the rest of Main Street towards east.

And lastly, we’d like to include Councillor’s Bothwell reference to "Heritage Districts Work!" - a report from a series of studies of many Ontario heritage conservation districts published by the University of Waterloo and recognized as a reference document all over the world:

While development applications are pushed forward, this heritage study has been continually pushed back by Planning staff. Now, this report recommends against the HCD study, and proposes a complex planning framework with the intent to support intensification.

Monday, December 21st, Council will decide which gift they leave for Grimsby's future generations: a development landscape, or a Main Street East of heritage character?

At Christmas time, a Council decision to switch to intensification will likely go unnoticed. It will be too late to do anything meaningful when you read the next "Notice of Public Meeting" for another large condominium or see the cranes going up for a surprise development next to your home.

Please take a few minutes and send your Councillors a Christmas card this week. Ask them to vote "YES" to start the Heritage Conservation District Study on Main Street East. This street deserves the best chance to be preserved.