Responsible development at 133 Main Street East?Five Councillors are causing a big setback in this fight 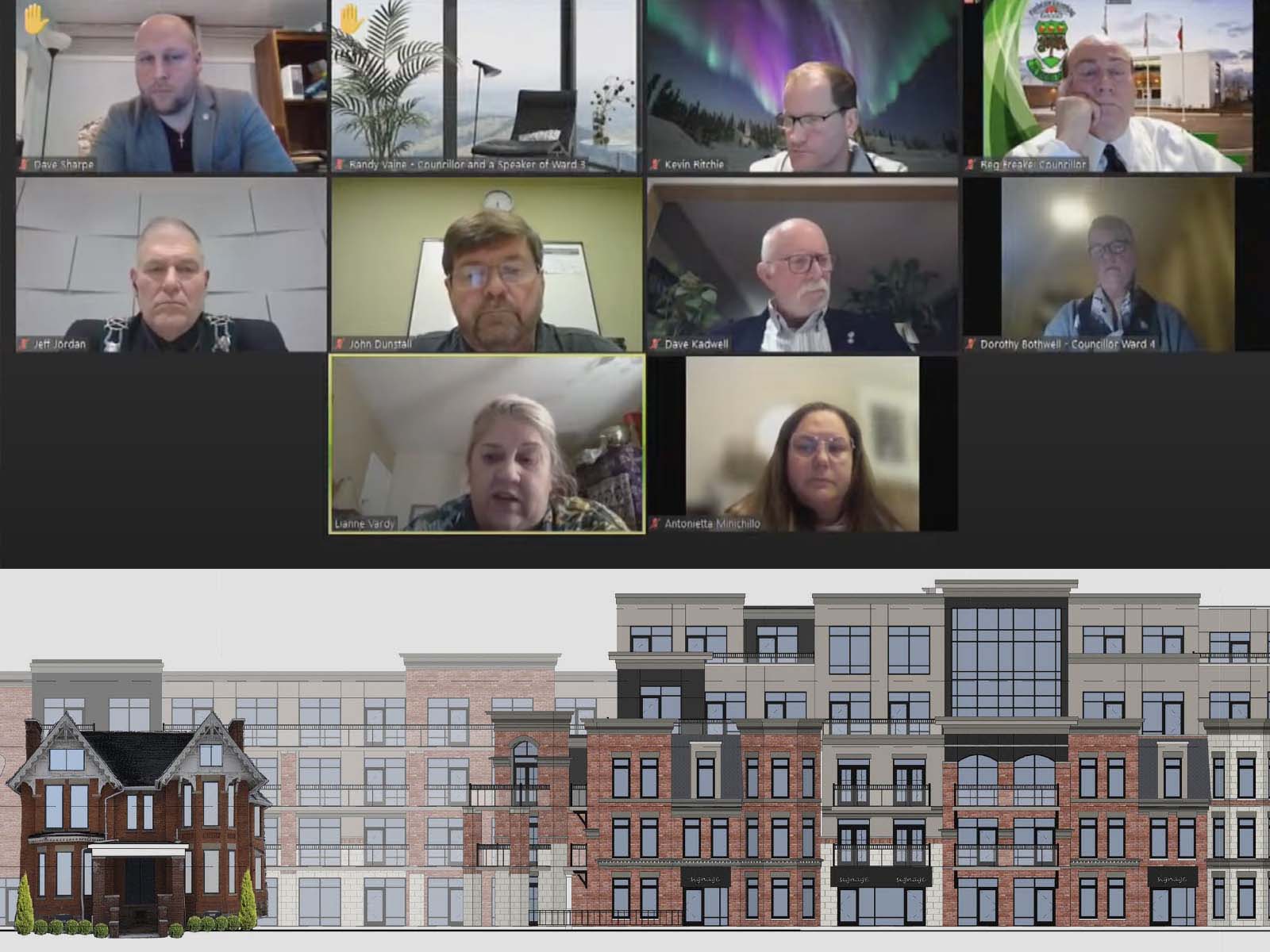 What’s been happening at Town Hall since the beginning of 2022 continues a three-year drama, reaching new heights. Among the flurry of controversies created from the lack of transparency and accountability during this administration, there is a new decision being made with major consequences regarding Main Street East.

Burgess Heritage Group/DeSantis Homes (BHG), the proponent of the five-storey high-density application at the old Grout Nelles house, just got a big boost from the usual five Councillors for their proposal. It came in form of a motion for the approval of a heritage permit voted on at the Committee of the Whole (COTW) on January 19th, after a discussion at the Heritage Grimsby Advisory Committee meeting (HGAC).

This heritage permit was first requested of the HGAC at their January 11 meeting. So far it has been kept away from the public eye, appearing to ask for approval to demolish the “modern” coach building and the temporary removal of the front porch of the historic house. Staff recommended its approval, contingent on a number of conditions for protection and restoration of the designated home, many of which fall under the Provincial Standards and Guidelines for the Conservation of Historic Places.

We’ve learned from this meeting that the moving of the house is being reconsidered by the BHG. Additionally, in September 2021, Council was presented in closed session with a slightly modified plan for this development. This plan is similar to the one proposed at the Town’s Open House held in 2019. However, this modified plan has yet to surface during any discussions or communications of this developer’s Ontario Land Tribunal (OLT) challenge to which SaveMainStreet (SMS) is a participant.

As part of their recommendation report for this heritage application, Planning staff also took the opportunity to introduce two debatable items regarding the five-storey condominium application which is currently under dispute at the OLT.

Recommendation #17 (see below), which touches a key issue in this OLT challenge, opened a can of worms with large implications for the success of Town’s case against this, and the also OLT challenged neighbouring Losani (Coles) high-density proposal. Both ask for reduced setbacks from the street to maximize the build coverage of the sites.

17. That the new construction be designed and positioned on the lot to preserve the integrity of the home, and maintain sightlines to the greatest extent possible;

Taking advantage of the vague description provided by staff for the sightline preservation to the historic house, the BHG team present at the HGAC meeting proposed the following revision (obviously to their advantage):

17. That the new construction be designed and positioned on the lot to preserve the integrity of the home, and maintain sightlines from the intersection of Nelles Road North and Main Street East to the greatest extent possible;

As the proposed condominium would wrap around the historic house on the east side of Main Street, this version would have obtained the committee’s endorsement for a minimal setback from the street that this developer is pursuing, not in keeping with the Town’s Official Plan requirements for Main Street outside Downtown.

After a lengthy debate, involving the committee members, staff and Town’s legal counsel, the committee maintained the initial open-ended recommendation from staff.

However, BHG (DeSantis) escalated their request at the January 19th Committee of the Whole meeting, asking that their proposed revision be maintained. During the discussion with the Council members, the Planning Director was quick to defend this request, stating that mixed-use development requires easy access from the street, and played down the impact of his requirement on Main Street East. This open endorsement from staff is problematic for two reasons at least:

These setbacks are an important planning consideration and are guiding the look and feel of the street. Once buildings start closing in, similarly to Winston Road, future attempts to defend the historic look of Main Street East and the Official Plan intent for sensible infills becomes an impossible task.

It is not clear why the recommendation from Planning was worded so vaguely in the first place. What we find highly troubling though, is staff’s endorsement for setbacks and a built form which are clearly not contributing, let alone improving the historic character of the street. This recommendation clearly is not in realm of heritage conservation that staff so proudly touts among their recent achievements, especially in the midst of the current Main Street East HCD study.

These reasons and their large implications were not of concern for Councillor Kadwell who was “fine with this” developer request. He did just a few months ago, declared his opposition for high-density condos in this area in front of more than 100 residents at SMS’s August 2021 community gathering.

Councillor Dunstall also advocated for this recommendation, both at the HGAC and the COTW meeting, arguing that the house has been vacant for a long time and we should be grateful that the developer is going to restore it.

There is no question that the Grout Nelles house is one of the most important heritage homes in Grimsby. Because of that, it is easy to get the community carried away by the promise of a beautiful restoration. What Councillor Dunstall is trying to downplay is that the developer is now using this house as a bargaining chip, holding its restoration hostage to the approval of an application which disregards the context of this area, is over double the permitted height and introduces levels of density comparable to those prescribed for the Go Station.

As Councillor Lianne Vardy noted, “If the developer doesn’t get what they want, then the developer has the option to sell the property to someone that will respect the fact that it’s a heritage property and it comes with a certain history that you want to maintain and it’s something that the community feel very strongly about.”

We commend Councillors Dorothy Botwhell and Lianne Vardy for their unwavering position and strong arguments against this proposal which is not keeping with the intent of our Official Plan, its Main Street Policies, Zoning By-Laws, and the historic character of this area which a majority of Grimsby’s residents wish to preserve.

Leveraging a new version recommended by the Planning Director at this COTW meeting, the group of five Councillors awarded the developer even more than what he initially asked for, strengthening their endorsement for a minimal setback and undermining Council’s own direction for the Town’s defense against BHG at the OLT.

The fight put up by Councillors Vardy and Bothwell did help, at least eliminating the suggestion from staff’s new version that Council would endorse this particular application:

That the any new construction be designed and positioned on the lot to preserve the integrity of the of the home, and maintain sightlines to the heritage resource, and that the commercial use setback be taken into consideration at the South Eastern portion of the lot during the urban design review panel to ensure the viability of the use and to promote accessibility to the general public.

The minimum building setback for Neighbourhood Commercial Zoning in Town of Grimsby is 3 metres. However the large Main Street setback requirement of Grimsby’s Official Plan takes precedence. It should be respected for all new developments. This is especially important since these setbacks are a major consideration of the Heritage Conservation District (HCD) Study.

Yet staff and the five Councillors are giving in to the developer’s request, disregarding the Official Plan and endorsing a vision for this area that is contrary to Council’s own direction to protect Main Street East.

Note that the “reason” for this vision is to “ensure viability of the use and to promote accessibility to the general public”. This ignores the fact that ALL other commercial buildings immediately next to and opposite these sites have been required to respect the Official Plan policies for Main Street setback. These businesses do not seem to be struggling because of their compliance.

For your reference, this is how the voting was split:

Given the willingness of these five Councillors to concede on such important matters, we expect more discussions in closed sessions, potentially leading to a winning settlement for the developer, despite large opposition from the community against this application.

The decision made on January 19th is a big blow for the Town’s case at the OLT. It go through another approval at the February 7th Council meeting. Without your action, this important decision will slip through and get a final vote as part of the approval of the January 19th COTW meeting minutes.

If you are concerned about this development and the precedent that will be set in this area, ask Council to revert their support for this decision and continue the fight against high-density proposals on Main Street East. Remind them of their promise to you for responsible development and to respect Grimsby's Official Plan which does not permit these massive buildings in this part of our town. Copy us so we can ensure that your message is not ignored.