Grimsby, it's time to act!Council to decide if they keep the historic character of Main Street East

What was planned to be a regular Grimsby Heritage Advisory Committee (GHAC) meeting on October 6th, turned into another nail-bitting show, prompted by a notice of motion advanced by Councillor Bothwell for starting the Heritage Conservation District Study (HCD) on Main Street East.

An HCD is a tool provided by the province to cities and towns to implement robust protection of a community’s heritage and existing streetscapes, and to shield against unsuitable planning and inconsiderate developers.

After months of delay, the motion advanced last week at the GHAC is intended to give Council and Planning Department a push to finally get Main Street East on the path of character preservation. Once started, this study will provide a much needed evaluation and documentation of the heritage assets on Main Street East, and recommend policies to guide responsible, in-character development, afforded under the Ontario Heritage Act.

The motion also includes an interim control by-law meant to stop development of sites along Main Street East immediately and for one year, while allowing home owners to do alterations, and the hospital to execute their rebuilding plans. If you wonder what would happen with the proposed 5 storey mixed-use at Nelles Rd. and Main Street East, it would need to wait for one year until heritage issues are sorted out, and then comply to the stricter limits enforceable through the resulting heritage conservation district plan.

Before we go deeper into the story, we need to mention that the motion falls into one of the statutory obligations of the GHAC, which is to advise council “prior to undertaking a study of any area of the Municipality for the purpose of designating one or more heritage conservation districts under Part V, Heritage Conservation Districts of the OHA (s. 40), and provide advice on s. 41 and s. 42 as required.”

The turn of events at the GHAC meeting didn’t seem to go well with the committee’s Chair, Councillor Dunstall, who opposed even the consideration of the notice of motion and then scrambled to block the voting for having it advanced to Council. Thankfully, the motion was supported and passed by all other GHAC members, and it will be up for Council voting on Monday, October 19th. 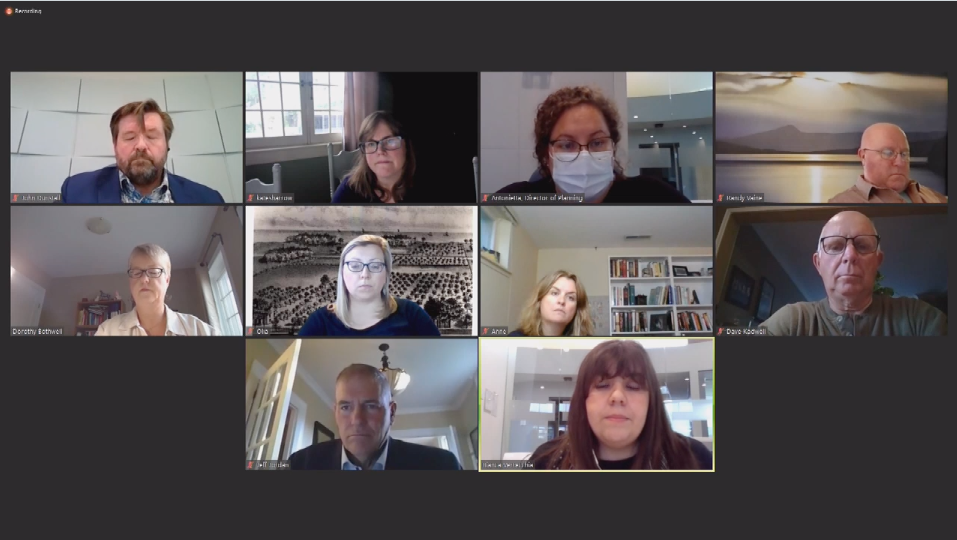 Surprisingly though, this motion was also not welcomed by the new Planning Director, who only minutes before, gave us an impressive introduction about her experience and love for Grimsby’s heritage. We find that reaction quite contrasting with other municipal planning departments which are advocating for protective heritage districts in historic areas targeted by developers. To give you just one example from the slew of municipalities with successful conservation districts, this excerpt is from a planning staff report in Oakville:

“None of the alternate methods – individual property designation, Section 27 listing, site plan control or zoning – can protect Downtown Oakville in a comprehensive manner as a heritage conservation district plan is meant to do.”

One would think the Planning Director would welcome support for advancing a stated Strategic Priority of our town. Instead, the motion seems to have impeded the Director’s plans for a report asking council to decide which type of study to start on Main Street East: Cultural Heritage Landscape or Heritage Conservation District Study?

If you're new to the matter, here's a quick recap. On January 21, Save Main Street in partnership with the Grimsby Historic Society presented arguments for the urgent need of creating Heritage Conservation Districts on our Main Street, starting with the East portion. The Heritage Advisory Committee and the Council supported the initiative, referring a Heritage Conservation District Study to the budgetary process, for allocation of the necessary funding. Through a series of miraculous transformations, it became "A Cultural Heritage Landscape Study" in the draft presentation for the budget, and then "A Study" just in time for debate in Council. We're not sure who operated the magic wand, but the two eventful budgeting meetings were highlighted by the Chair of the Heritage Committee, Coun. Dunstall, fighting against heritage protection, and Coun. Ritchie openly attempting to hijack this initiative into a Secondary Plan. In the end, a majority of Council agreed to vote for a study with a fuzzy name - "Main Street East Cultural Heritage Landscape or Heritage Conservation District Study".

The distinction may seem like a technicality, since both studies mention “Heritage”. The critical “little” detail is that a Cultural Heritage Landscape study can be done under the Planning Act, opening the door to a Secondary Plan, once again.

A Secondary Plan is a fine-grained rezoning that cannot “cap development”, especially on main streets which are now recommended by the Province as targets for intensification. Not to mention that our Main Street is on a Regional Road.

You need to look no further than the West end to see how a six-storey limit became twelve and now we’re seeing applications for 20+. A similar upwards trajectory has been the reality virtually anywhere Secondary Plans regulate intensification areas. Because of all the provincial and regional interests, all “community engagement” exercises associated with this study would be just going through the motions of an already set outcome.

If you're not convinced yet, here is another example from Guelph, where an outrageous application was refused by council and now the developer is appealing the decision at LPAT: Skyline tower proposal threatens character and heritage of Guelph core. 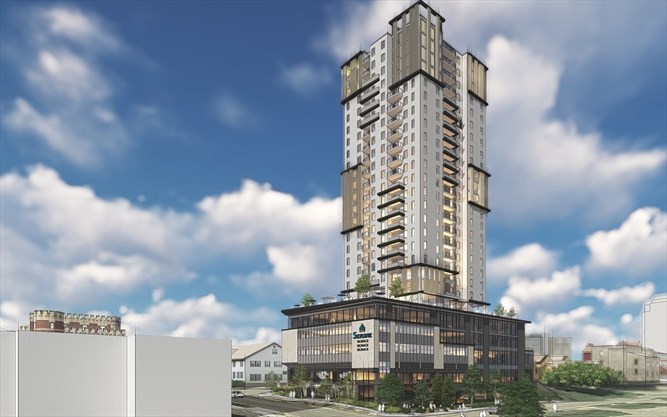 And it is all perfectly predictable. Secondary Plans are done under the Planning Act, which is pushing intensification above all else. Under the new Provincial Policies, putting a Secondary Plan in place on Main Street is a declaration of intent to intensify the area. Any developer wanting to build higher, bigger, more than the “limits” is all but guaranteed a win at LPAT, because their desires are consistent with the intensification-first intent signaled by the Secondary Plan.

In contrast, a Heritage Conservation District Plan is implemented under the Ontario Heritage Act and it acts like a shield, superseding conflicting planning regulations in the district area.

Beside the stronger legal protection, it affirms the commitment of the Town towards heritage preservation and responsible growth. Community engagement becomes more meaningful and the result is more truthful to what residents want to see where they live. There is still room for new development but under the law, it must conform with the objectives of the plan which include staying in character of the area. The HCD plan includes limits for height, mass and setbacks that are much harder to override, because doing so would go against the direction set by the plan.

Developers hate conservation districts because the Heritage Act can give Council a strong position at LPAT. But are enough Councillors willing to position our town at an advantage? Or are we going to limit our options to begging for a few more parking spots or to reduce a couple of units on every future condo proposed on Main Street East?

For a municipality recognized more than 230 years old, and with a community feeling so strongly about its past, this situation is baffling at best. ALL our Councillors should be stewards of our town’s long history and they should be the ones to lead the way to preserve it for generations to come.

Main Street East is a living showcase of Grimsby’s early history. Some of it is still intact, a rare find these days. Beautiful estate homes with large setbacks that tell the long history of our prosperous farming industry, mature trees along the road with generous views of the escarpment - they are all part of that character that our community cherishes and out-of-towners love to see.

As our town evolves, we need to ensure that buildings, views, and landscapes are still there and they can be celebrated in their wider context. Just like we can do today, our grandchildren walking Main Street should learn and experience the history of their place, and be able to imagine what Grimsby once looked like.

Please act. Don't let developers' interests bulldoze over the very reason you chose to live here. Ask your Councillors once again to vote for a Heritage Conservation District Study on Main Street East.

They promised you responsible development. We will remember their choice in October 2022.

If it's easier, you can use this template as a starting point or as is (select text, copy and paste in your own message):

As a concerned Grimsby resident, I am asking you to vote Yes in favour of the immediate start of the Main Street East Heritage Conservation District Study and the interim control bylaw as recommended by the Heritage Grimsby Advisory Committee. Only a Heritage Conservation District will ensure solid protection at an LPAT challenge under current provincial legislation, while supporting and defining desirable future development.

Responsible development and heritage conservation were major campaign issues in 2018 for which Grimsby residents voted strongly in favour.

While other decisions you’ve made could be blamed on the policies decided by the former Council, the results of this study are entirely in your hands.

It is imperative that these actions be taken now to put a halt to the unacceptable type and level of development that continually threatens the entire town's heritage character. This is your best chance to start acting on your strategic priorities for responsible development and heritage preservation. Please do not disappoint your constituents.