Update: Responsible development at 133 Main Street East?Five Councillors are causing a big setback in this fight

On Monday February 7th, Council upheld the concession given to the developer for a reduced setback at 133 Main Street East by adopting adopting the Committee of the Whole on January 19th minutes (COTW). This concession was part of the much-debated heritage permit due to Planning Staff’s inclusion of two recommendations regarding the new development proposal currently under dispute at the Ontario Land Tribunal (OLT). If you are new to the issue and curious how this came to be, we encourage you to read our previous update here.

Prompted by the large number of messages from residents concerned about the potential implications of this decision, Councillor Bothwell attempted to lift two resolutions from the January COTW meeting for further consideration. Resolution #CW-22-4 concedes to a minimal setback of the mixed-use proposal to Main Street while resolution #CW-22-7 approves the heritage permit requested by the developer with the awarded minimal setback. 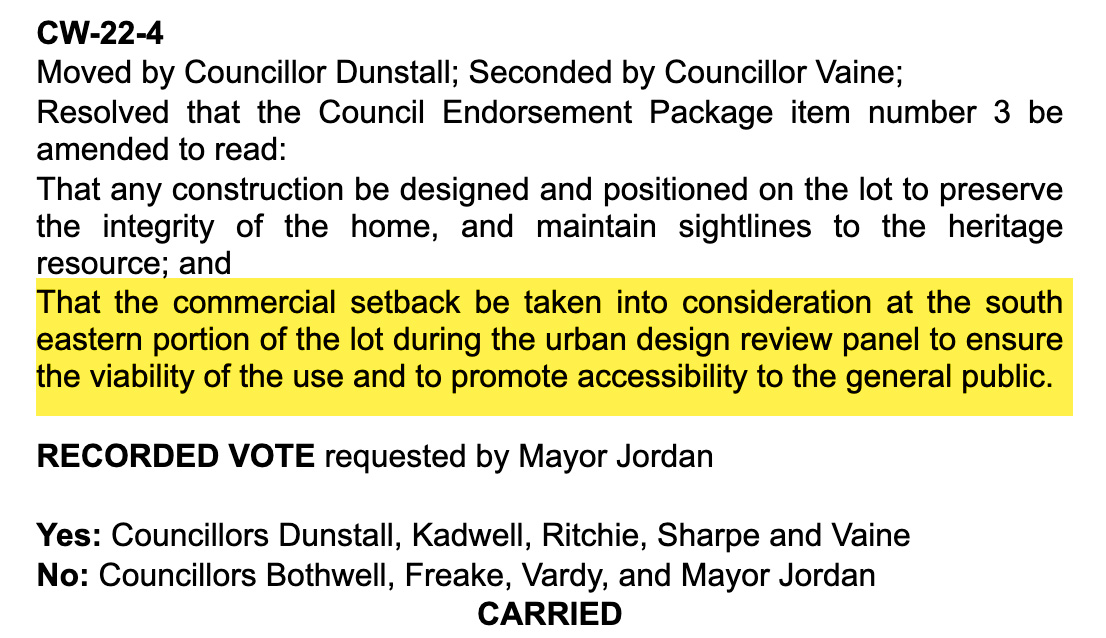 Grimsby’s Official Plan (OP) mandates that these large Main Street setbacks be maintained. This requirement has precedence over any generic commercial specifications including the Zoning By-law #14-45 specified minimum 3 meters for this area. All other commercial buildings within sight of 133 Main St. East, abide by this rule, including newer constructions such as Dr. Dan Dentistry and Tim Hortons. The requirement is critically important as these setbacks are a major consideration of the current Heritage Conservation District (HCD) Study.

For those interested in understanding the nitty-gritty of the planning and heritage matters being disregarded with this decision, we have provided the document below. Without doubt, this issue will be further argued at the upcoming OLT hearing for 133 Main Street East scheduled for October this year.

(If you can't view it directly, you can also access the presentation here)

Councillor’s Bothwell request to have resolutions #CW-22-4 and #CW-22-7 reconsidered was swiftly voted down by the same five Councillors who originally approved them. Here is how the vote was split:

Note: Councillor Vardy was absent from this part of the meeting.

As we anticipated in our last update, a discussion of 133 Main Street East in closed session followed the approval of these two resolutions. We will have to wait to see what exactly was decided during this closed-door session. However, talk of the closed-door decision during the ensuing open session hints to some positive news, given the past voting history of Council towards the protection of this historic area of our town:

We thank all the residents who sent letters to Council expressing concerns about the development at 133 Main Street East and asking for their renewed commitment to preserve this heritage landscape.

Although it may seem that such expressions of concern go unheeded, it is only through such continuing efforts reminding our Council of their duty and promises that will make any difference. If nothing else, in this election year these reminders do not go unnoticed by Council members.

Previously we had encouraged such engagement, asking that we be copied to ensure that they would receive some form of publication. From those forwarded to SMS, we’d like to share this letter sent by long-time resident and well-known author Carol Mazur. We believe she has captured the community’s pulse exactly:

I am writing to you as a Grimsby citizen concerned about the current trend of development in our town. Specifically I would like to address an issue that has recently come to my attention, namely the heritage permit request by DeSantis Homes to allow for reduced setbacks from Main Street. Apparently this request, even while the town is presenting its case to the OLT, was voted on and approved by five council members during the Committee of the Whole meeting of January 19th. For one thing, the public knew nothing of this request which was so willingly promoted by the planning staff. I would like to know who the planning staff is working for - the developers or the Town of Grimsby? And I would like to know who the councillors are representing - the developers or the citizens that voted them into office? Neither of the latter seem to be the case. I find the piecemeal approach by the Planning Department of designating heritage homes along Main Street East to be a most inefficient and ineffective way of preserving the heritage of this special part of town. I say, complete the Main Street East Heritage Conservation District Study first before allowing such intrusive in incompatible intensive developments to permanently change the historic legacy of this street. If these two developments are allowed to be built as proposed, there will be little defence in preventing more such building to occur.

At the very least, I hope the Council will not approve the reduced setbacks requested by DeSantis Homes at the Council meeting on February 7. There is an Official Plan and the plan for this part of Main Street East calls for deep setbacks for a reason, and that is to preserve the heritage look and feel of the street. We should all be proud of Grimsby's history. Not just the buildings, but every single piece of land along Main Street East and West has a story. Let us keep this in mind when making decisions in our planning for the future.