What is Town's Planning trying to do with the Main Street East HCD Study? 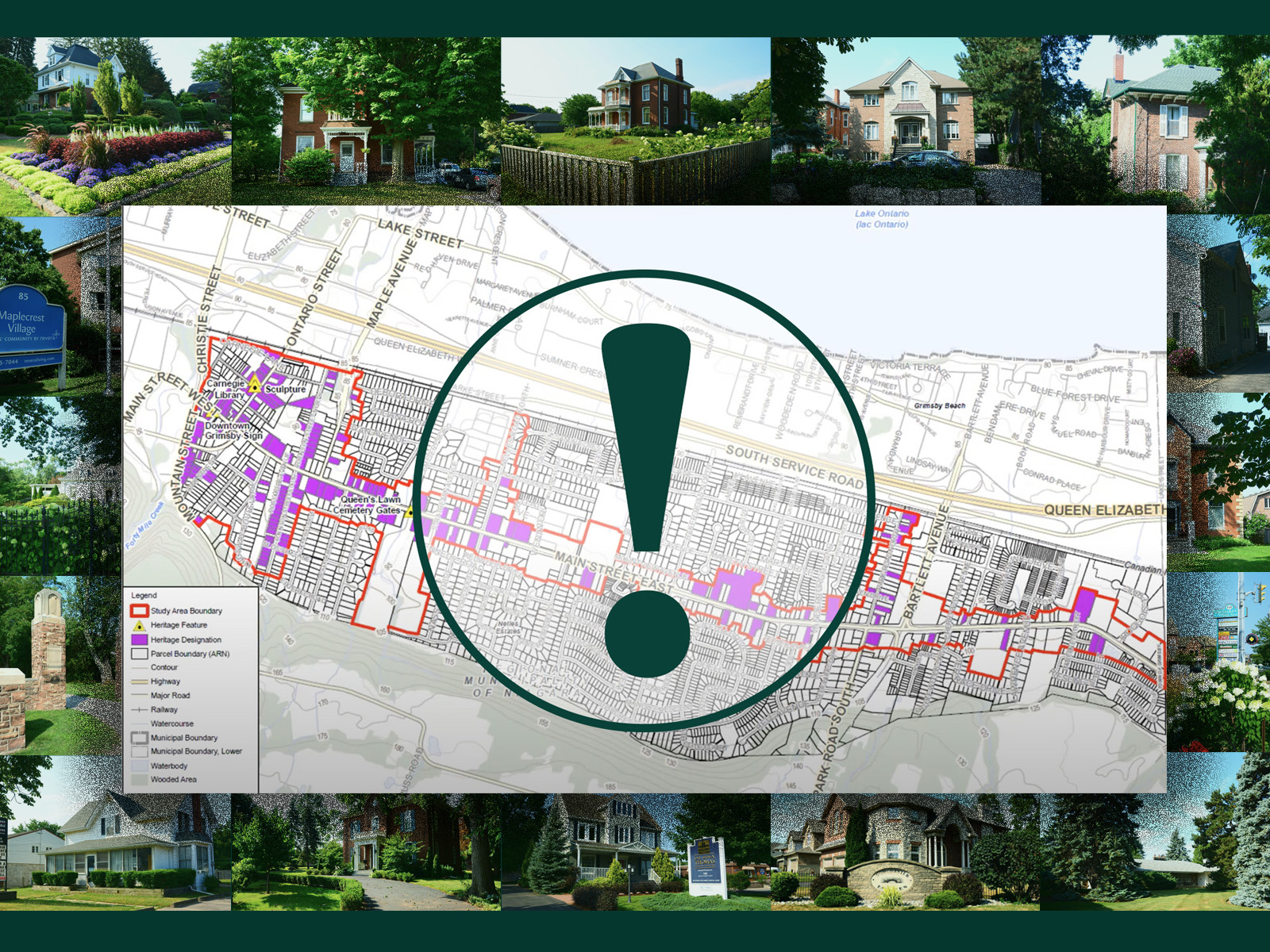 The much awaited Main Street East Heritage Conservation District (HCD) Study has finally started with the first Public Information Centre (PIC) being held on October 20th, by Town’s Planning staff and consultants for the study from Stantec.

This session was light in information and public engagement per se, but still valuable for those having questions about the process and heritage planning matters. We appreciate the professional answers and information given by the consultants on questions regarding the purpose of an HCD, and debunking some of the common myths around property values and insurance. If you did not attend the virtual PIC, we encourage you to watch the video posted on the Town’s YouTube Channel.

Hundreds of letters in support of this study have been sent to this Council in the last two years. Although we’d like to bring you some positive news from this PIC session, we see no light at the end of the tunnel, yet. Before rolling your eyes and saying “not again!” please bear with us to the end of this article to understand how this study is being manipulated and what is at stake.

From the issues discussed at this event, one in particular stood out and quickly became “the elephant” in the virtual room: the study map. The presented study area extends over 500 properties, covering the whole Downtown and streets intersecting Main Street East that have nothing to do historically with Main Street East. 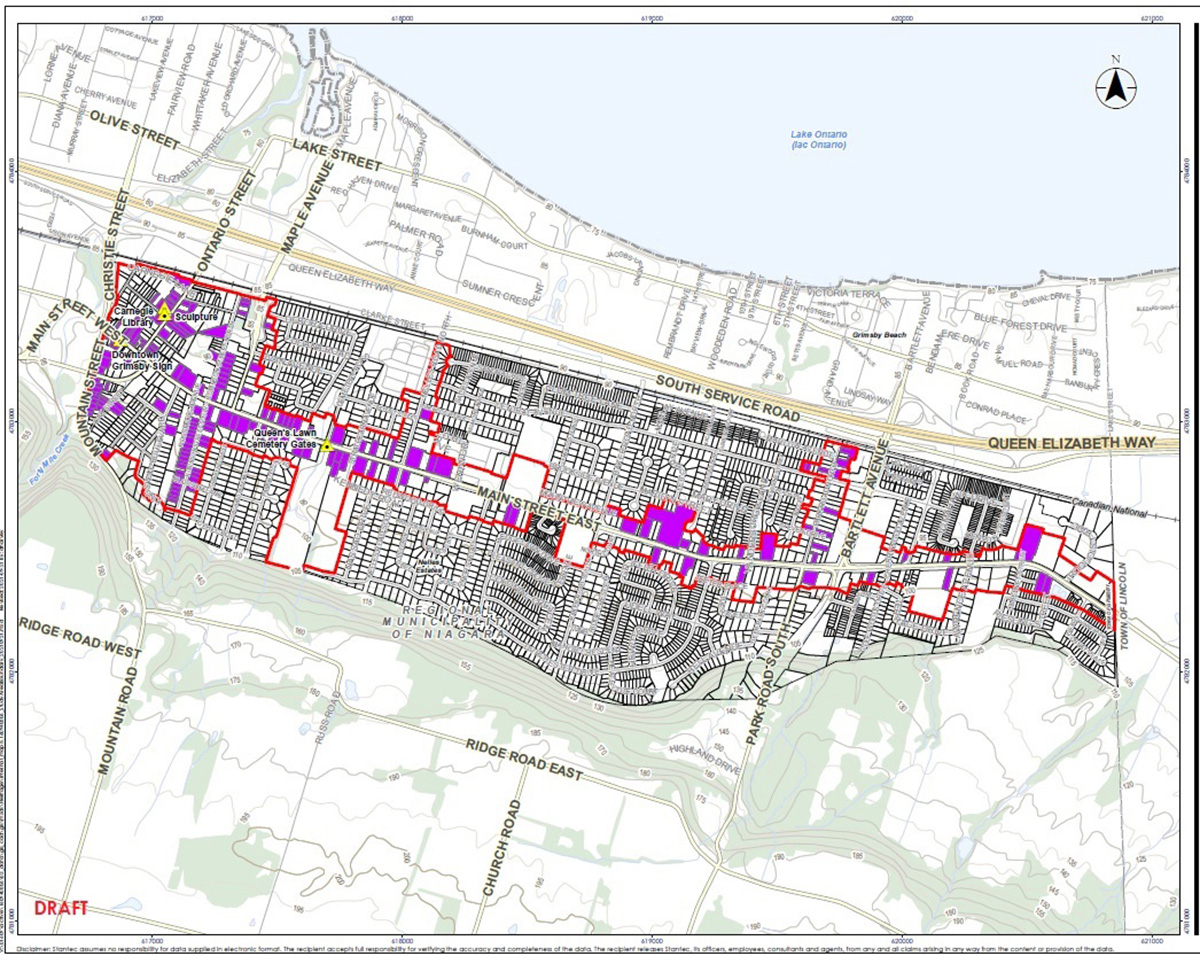 What are you really looking at? Just another example of our town’s Planning Department making decisions without Council approval, advancing their own agenda. This is an unauthorised expansion in scope with a HUGE potential to derail all Main Street East conservation efforts.

Councillor Bothwell, while participating at the meeting, expressed her great concern over the potential impact of the large outlined area on the results of the study, asking for the rationale behind including these additional areas. As the polite answers provided by the consultants weren’t quite clear, pertinent and repeated questions from a resident of how this new map was developed eventually revealed that Town’s Planning department had hands-on involvement.

This is not the first time Planning staff has injected themselves into this project in an effort to manipulate the outcome.

The motion asking Council to start the study approved in the 2020 budget came from the Heritage Grimsby Advisory Committee (HGAC) on October 19, 2020. Involvement of Planning staff is NOT a required part of the process under the Ontario Heritage Act. Nevertheless, instead of working with the HGAC to fine-tune the study motion and the proposed map that came with it, staff created a whole situation at Council, taking over the study process and feeding the “G5” with “arguments” to also advance a Secondary Plan, something that the community clearly rejected in the past.

Is staff just going through the motions with no real intention to protect the area? Such large HCD studies have low chances of being successful, rarely getting to the Plan stage.

As the consultant noted in her response about the map at this webinar, it’s not unusual that study areas change during the process. What we find highly unusual is the amount of properties added which have no connection to Main Street East’s historic profile or the original intent of the study.

When the Grimsby Historical Society & Save Main Street made the 1st delegation to ask Council for this study in January 2020, our boundary recommendations were well considered. They were specific to the Main Street East area, formerly part of North Grimsby Township, developed in the late 1800’s for fruit farming after the Nelles families divested themselves of these lands along the Queenston Grimsby Road. The main focus was to protect the prosperous, well set back homes and the Cultural Heritage Landscapes (CHLs) of the eastern portion of our town.

This was part of a larger conservation strategy which many residents, members of the old Heritage Committee and Grimsby Historical Archives have been working toward for many years - separate studies for 3 potentially separate Heritage Districts - Main St East, Main West and the Downtown Business District. 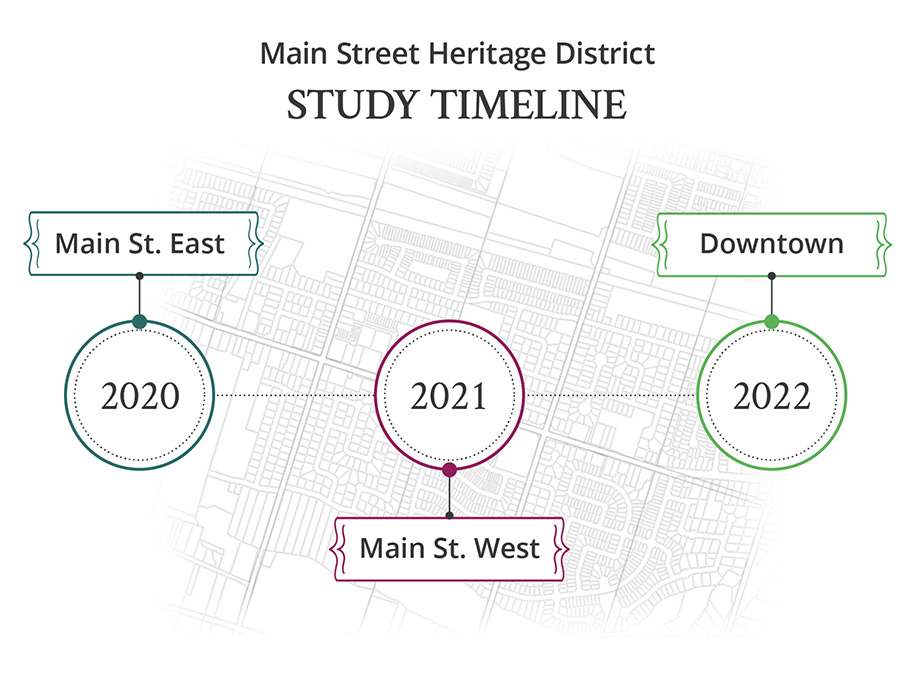 We recognized that a HCD study could shrink or expand boundaries to incorporate adjacent properties of interest, but it is inappropriate to concurrently blanket-study the original Grimsby village or Downtown business district as they represent totally different periods and aspects of Grimsby’s history. These areas are also visually distinctive and have very different planning policies within the Town’s existing Official Plan (OP), the Downtown being a designated intensification area, while the rest of the proposed study area is considered a stable neighbourhood not intended for similar levels of growth.

If a heritage district plan is allowed to be recommended based on this new study map, any resultant heritage policy will be greatly diluted or a small area will be carved out with little regard to the history of Main Street East and the initial intent of the study.

How did this study map get so out of hand? Again, Planning staff made the decisions and the majority of Council followed. 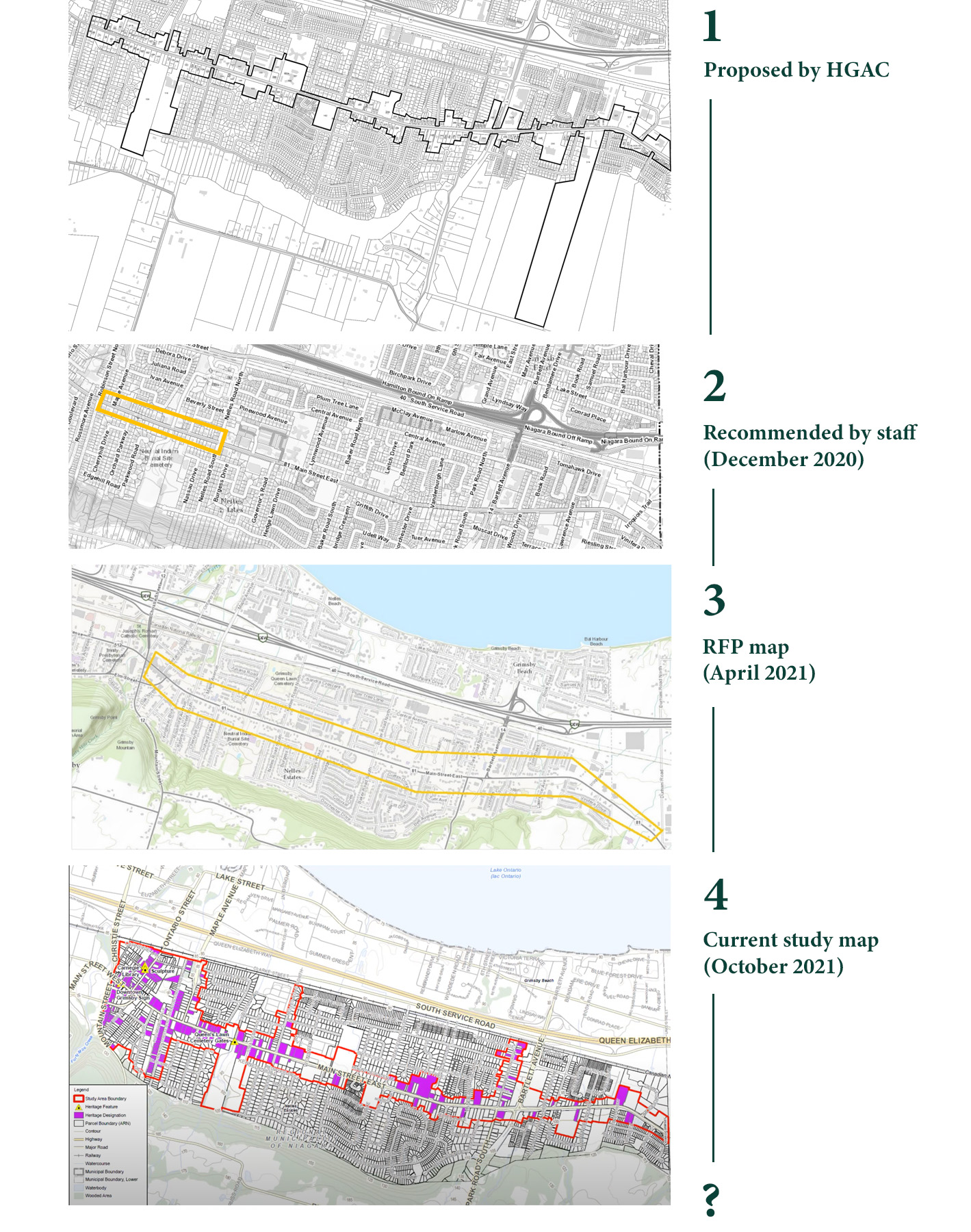 When HGAC proposed the study area in October 2020, staff opined that “it was too large” and a more “focused” approach was needed.

“If the study area is too large, our efforts kinda diminish and focused efforts towards more sensitive areas could be diluted. So perhaps we need to reconsider the boundaries and focus our attention on key areas […]”.

While this is generally true, the initial study area was not too large at all. It contained around 180 properties, a size well in range of many other established HCDs in Ontario. The proposed study area now lists more than 500 properties of historical interest, a complete contradiction of Planning’s previous public statement.

Then, in December 2020, after the HGAC motion was voted down, staff proposed a Secondary Plan + HCD as a “comprehensive Main Street East strategy in general”. Under this strategy, they were “thinking” that only Main Street East from Robinson St. to Wentworth Ave. is worth studying and protecting.

A few months later, when a Request for Proposal (RFP) was published for tender, the study focus changed again. Staff reinstated the study area to the eastern border, but they also decided to include the Downtown portion of Main Street East.

Besides introducing a slew of problems, this action is not consistent with the direction provided by Grimsby’s Official Plan which states that Grimsby’s Downtown deserves its own HCD, with rules and policies tailored to businesses in the area decided in collaboration with the Downtown Improvement Association (DIA):

"3.5.2.1 The Town may consider the designation of all or part of the Downtown District as a Heritage Conservation District under the Ontario Heritage Act."

"3.5.2.4 The Town, in considering the preparation of the Community Improvement Plan and/or the establishment of the Heritage Conservation District shall consult with the Board of Directors and general membership of the Downtown Grimsby Business Improvement Area."

Such discussion is nowhere to be found in Town’s documents and minutes.

How did this RFP get approved? Before being tendered, it was presented at the GHAC on March 9th [mark 1:53:50], where staff did not want to “discuss too much of it in public” to “maintain the integrity of the RFP process”. The RFP then passed quietly at Council as part of the approval of the HGAC minutes.

Now Planning are overstepping their authority again, hiding behind the consultants, blending the much older Village of Grimsby and commercial downtown into the Main Street East Study, each a unique segment of the Town’s history which they don’t appear to grasp.

With streets and houses off and behind the Main Street corridor added in the mix, one can hardly call this a “Main Street East” HCD study any more. It rather looks like Planning is already at work crafting a Main Street East Secondary Plan with the required “transition areas” around any potential high intensification zones.

Are we thinking too far ahead? Unlikely. The intent to already start this Secondary Plan study was clearly outlined in the “Planning Touchpoint” report presented at a special Council meeting on October 17th.

Back to square one? Definitely YES!

If we still want to enjoy the look of beautiful heritage homes in the future along with responsible development on Main Street East, we need to stop this Planning staff from dragging the east side of our town into similar muddy planning policies that have already proven futile for the Casablanca and Winston neighbourhood area. We need to get back to the original intent of this HCD study, looking only at fronting properties on Main Street East from Robinson Street up to the eastern boundary of our town. The goal being to protect the historic features and character along this street first, while allowing responsible, in-context future development.

If we don’t act now, development-driven decisions, not heritage conservation policies, will continue to “shape” ever larger areas of our historic town than previously imagined, the direct opposite of what the community has demanded from this Council since they were elected in 2018.

What can you do?

Stantec, the consulting contractor, is asking for public input. Tell them to save our town before a Main Street East Secondary Plan becomes the unwelcomed elephant in the town. Tell them by emailing your thoughts and displeasure with the current study area. Copy all Councillors and planning staff when doing so. Send us a copy, too.

Click this button to open your email application with all the addresses already added for you, if you are reading this on a laptop or desktop, and have a separate email software:

SEND YOUR COMMENTS TO STANTEC'S CONSULTANTS

If you are using webmail (like Gmail), then login and paste the addresses below in a new message. You may need to replace semicolons with commas or paste addresses one by one.

Your engagement in this study is paramount. Stay aware of all future PICs and participate!

Our town’s heritage and small town character is at stake. This Council was elected on transparency, accountability and responsible development. They need to stay on top of this project and not let Town Planning Staff deploy obstructive diversionary tactics to advance opposing interests.