Will Council do anything to save the historical Nixon Hall?Designated land to be severed, most trees cleared 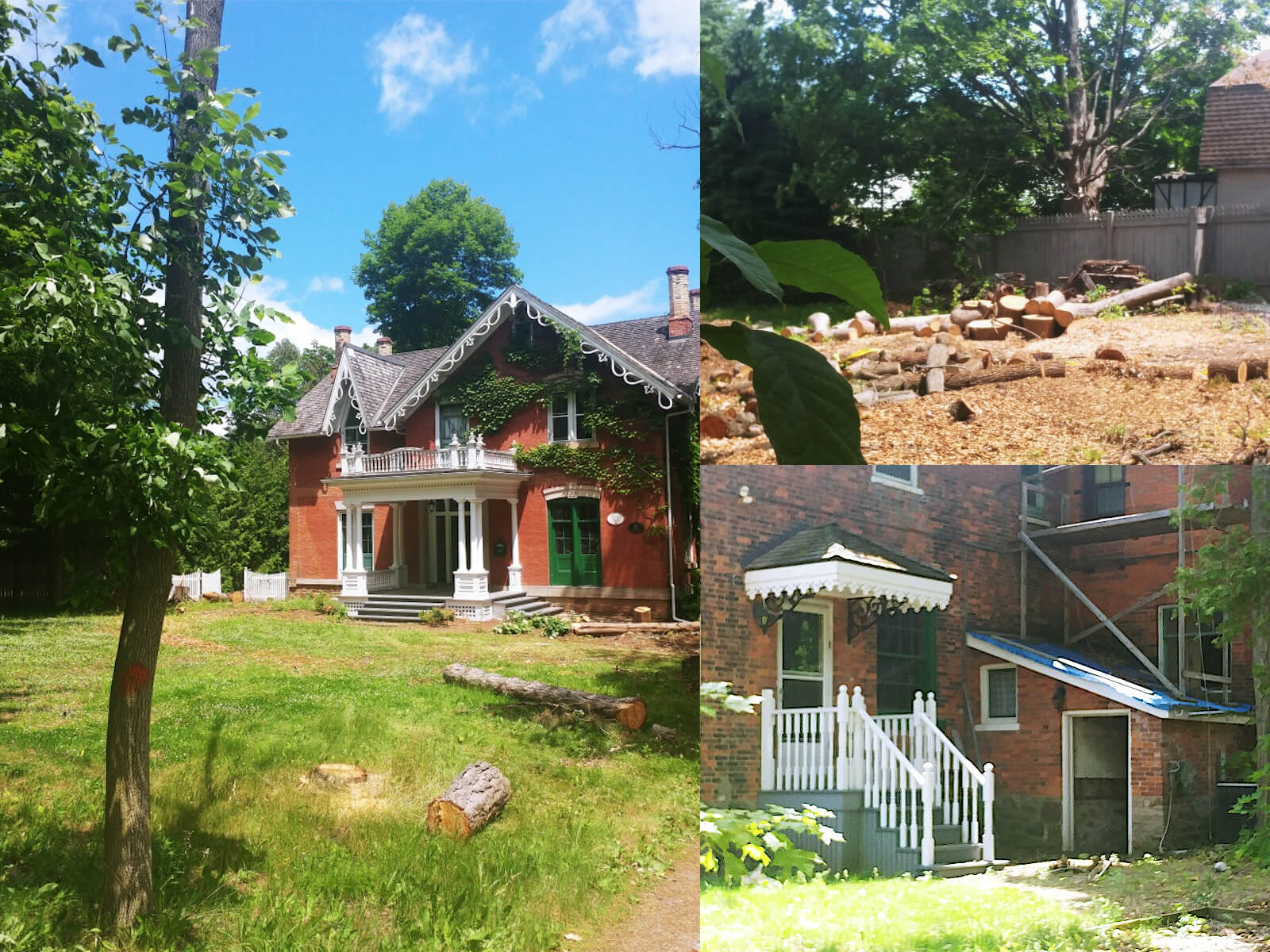 Have you lived in Grimsby for a while? Then you must have noticed historic Nixon Hall at 262 Main Street West. Behind the white picket fence and once tall trees, still stands one of the oldest and most significant houses in our town.

The remnant of a 1200 acre parcel that stretched from the Lake near Grimsby Beach, up over the escarpment as far as todays Mud Street, this property originally belonged to Allen and Mary Nixon, among the first United Empire Loyalists to settle at “the Forty” in 1787. Allen Nixon was one of the first members of the Grimsby Township Council and Junior Warden of the Grimsby Masonic Lodge.

The house that we can still admire today was built in 1854. During the World War II, it was host to “Farmerettes”, young women who came from all across Canada to Niagara’s Fruit Belt to help with farm work as many local men were away serving in the armed forces. In 1948, it became a temporary hospital after Grimsby’s hospital was destroyed in a fire. In 14 months while it served as the local hospital, over 1000 patients were treated and 288 babies were born in the building.

Nixon Hall has been part of the Grimsby Heritage Tour for many years. The historic significance of the site itself was recognized by the Town, who designated both the house and the land in 2004 under the Ontario Heritage Act Part IV.

The history of this site as part of our town’s origins was a story meant to be told with pride to future generations, but 233 years of living heritage is once again being disregarded by a developer.

In February, the property was sold and now appears to be in the early stages of redevelopment. The yard has been staked out for multi-lot severance. The quickly decaying house has been left for long periods unsecured. And those beautiful large trees that covered much of the land? Gone.

This shouldn’t come as a surprise to the members of our Town Council. We cautioned about the pitfalls of the current lack of any heritage conservation plan(s) during our delegation’s presentation to Council back in January 2020. Nixon Hall was highlighted as the example of “more to come”.

Since then, we have continually advocated the urgent need for Heritage Conservation District plans for Main Street under the Ontario Heritage Act, which would provide clarity during the development application process and eliminate developer-friendly loopholes afforded by the Provincial Planning Act.

Yet once again we live in Grimsby, the oldest incorporated municipality in Ontario, where there hasn’t been any real thought or action given to the conservation of its historical character which our community values greatly.

We find it difficult to believe that the actions taken by the developer at Nixon Hall received the blessing of our Heritage Advisory Committee, whose members have previously raised concerns about the future of this property. This Committee has not met for months owing to the current COVID 19 crisis, despite repeated requests from Councillor Bothwell, Committee member. We made inquiries to the current Committee Chair, Councillor Dunstall, asking if an application with the Town had been made and if so how was the developer allowed to clear most of the trees without any consultation with the Heritage Advisory Committee, which is required under the Ontario Heritage Act.

In a polite “move-along-nothing-to-see-here” reply, Councillor Dunstall assured us that nothing illegal has happened and that “under the Heritage Act the trees are not included with the land for designation”.

There is nothing in the Ontario Heritage Act, saying that land designation excludes the trees. The Town’s designation by-law for Nixon Hall is also clear: it designates the “real property” which, under the law, includes everything that is attached to the land.

What about our question about following a mandated process? We did not get an answer at all from Councillor Dunstall.

However, we received a more comprehensive reply from the Town’s Planning Department, which sheds some light into the conundrum at Nixon Hall.

Before removing the trees from the property, the developer signed a pre-consultation agreement with the Town. This agreement and subsequent discussions (which are not transparent to the rest of us) are required as part of the development application process, and meant to ensure that all necessary documentation is provided before a formal application takes its course.

In this case, the Planning Department included a requirement for an arborist report and a tree preservation plan, to cover for legal issues in case endangered species likely present on a wooded large site were cut down. However, none of the planning staff “thought” that it was also required to check with the Heritage Advisory Committee (as mandated by the Ontario Heritage Act) as to just how much of the tree coverage could be removed and be appropriate in order to keep the heritage attributes of the site relevant in their context.

It didn’t matter, though. The developer went ahead and “detached” most of the trees anyway in order to make room for his subdivision plans, with total disregard for the agreement signed with the Town.

It’s been almost three weeks since then. There has been no stop work order, nor investigation by the Town regarding the actions of this developer who was very well aware of the rules - why a pre-consultation agreement exists in the first place.

Where the Town took no action, the Ministry of Environment, Conservation and Parks should be able to investigate instead. There are still a couple of butternut trees standing, but most of the trees have been already felled and stumps will be next. If you’d like to help start this investigation, you can make a call at 1-866-663-8477 and ask the Ministry to look into the issue.

One would think that a heritage-conscious Council would at least ensure that the required development process is followed, not ignoring the destructive examples of our previous representatives. Two years later and it doesn’t seem likely to get any better.

A formal application for land subdivision will likely surface at the next Committee of Adjustment on July 21. If you live in the area, you should soon receive a notice. Please share it with us!